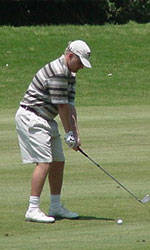 Six Former Tigers To Compete At Michelob Championship This Weekend

Engler became the sixth player in the field when he went through qualifying on Monday. He shot a 67 in the qualifier, then won a playoff against, among others, former Clemson golfer Joey Maxon. He was one of two Monday qualifiers to make the field. It will be the first PGA Tour event for Engler, who graduated from Clemson last May.

Glover will be making his second PGA Tour appearance. The native of Greenville, SC and Wade Hampton High made his PGA Tour debut last week and made the cut at the Texas Open. The previous week he won $27,000 by winning the championship of the Oklahoma Open. Glover and Engler paced the Tigers to a number-two national finish in May of 2001.

Julian, Coughlan, Ellis and Johnson have been full members of the PGA Tour this year. Engler will play with a former Clemson player in his first PGA Tour round, as Danny Ellis, an All-American at Clemson from 1990-93, will be in his three-man group. The Michelob Championships will be played at Kingsmill Golf Club in Williamsburg, VA and will be televised by ESPN Thursday through Sunday from 4-6 PM.

Three other former Tigers will be in the Buy.com Tour’s Bayonet Classic in Seaside, CA this weekend. Jonathan Byrd, ranked fifth on the Buy.com money list, will be one of the favorites. Charles Warren and Charles Raulerson are two other former Clemson players in the event.