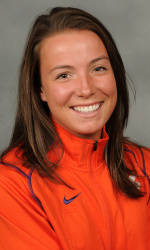 GREENSBORO, NC – Six members of the Clemson rowing team were named to the 2011 All-ACC Academic Rowing Team. The Tiger honorees are Grace Wolff.

Borchelt, a junior from Boston, Mass., who is majoring in Nursing, is a two-time Collegiate Rowing Coaches Association (CRCA) Scholar-Athlete and also a two-time member of the All-ACC Academic Rowing team, having previously been selected for the team in 2010. She is a member of Virginia’s First Varsity Eight crew which finished seventh in this year’s NCAA National Championships, winning the Petite Final and helping UVa to a No. 6 national team finish at the NCAA Championships, held last month in Sacramento, Calif. She becomes the second straight Cavalier to become the ACC’s Scholar-Athlete of the Year, following in the footsteps of former UVa All-America Jennifer Cromwell, who captured the honor last year.

In all, one All-America, nine members of the All-ACC Rowing team, 16 CRCA Scholar-Athletes and seven CRCA All-Region honorees are featured on the 2011 All-ACC Academic Rowing Team. The 35 rowers were selected from a pool of 122 nominees from the ACC’s six schools who sponsor rowing–Boston College, Clemson, Duke, Miami, North Carolina and Virginia–an impressive average of almost 21 nominees per school.

BC’s Da’Loia-Moore was also named the 2011 ACC Freshman of the Year.