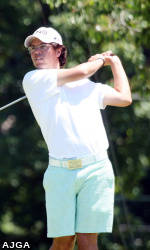 Billy Kennerly will enroll in classes at Clemson next week, but his last weekend of summer vacation will be spent playing with the pros. The native Alpharetta, GA qualified for the Wyndham by winning the FJ Championship, an AJGA junior tournament that was played at Sedgefield last month.

Kennerly fired an 11-under par 269 to win the tournament by four shots. It tied the record for the low score for the tournament, as he led the event after each of the four rounds after an opening round of 63. Kennerly finished second in two other AJGA events this summer and is ranked fifth in the latest AJGA national rankings.

Former Tigers now on the PGA Tour who will play in the Wyndham this weekend are Charles Warren, Lucas Glover, D.J. Trahan, Ben Martin and Kyle Stanley. Glover, Stanley and Trahan have already clinched spots in the FedExCup Playoffs, as has Jonathan Byrd, who is not playing this week.

Warren has split his time on the PGA and Nationwide Tour this summer. He would need to win the Wyndham to qualify for the playoffs. He has played well in Greensboro previously with a third place in 2005 and a 13th-place finish in 2007.

Glover ranks 38th in the FedExCup standings and is using the tournament as a warmup for the playoffs, which start at The Barclays Tournament in Edison, NJ the following week. Glover won the Wells Fargo Invitational in Charlotte earlier this summer. He finished seventh at the Wyndham last year when he had four straight rounds of 67 or better.

Stanley ranks 47th in the FedExCup standings and has had a strong rookie year with over $1 million in earnings. He has made 17 cuts in 22 tournaments, including a second-place finish at the John Deere Classic in July.

Martin would probably need a sixth-place finish or better to qualify for the playoffs. He ranks 149th on the FedExCup standings entering this week. He is coming off his best finish however, a sixth place at the Reno-Tahoe Open in Colorado.

Trahan ranks 105th in the FedExCup standings entering the Wyndham. He has made the cut in 13 of 24 events this year and has won $549,000, 123rd on the money list. Trahan has played well in Greensboro in the past and had the lead in the tournament after three rounds in 2005.