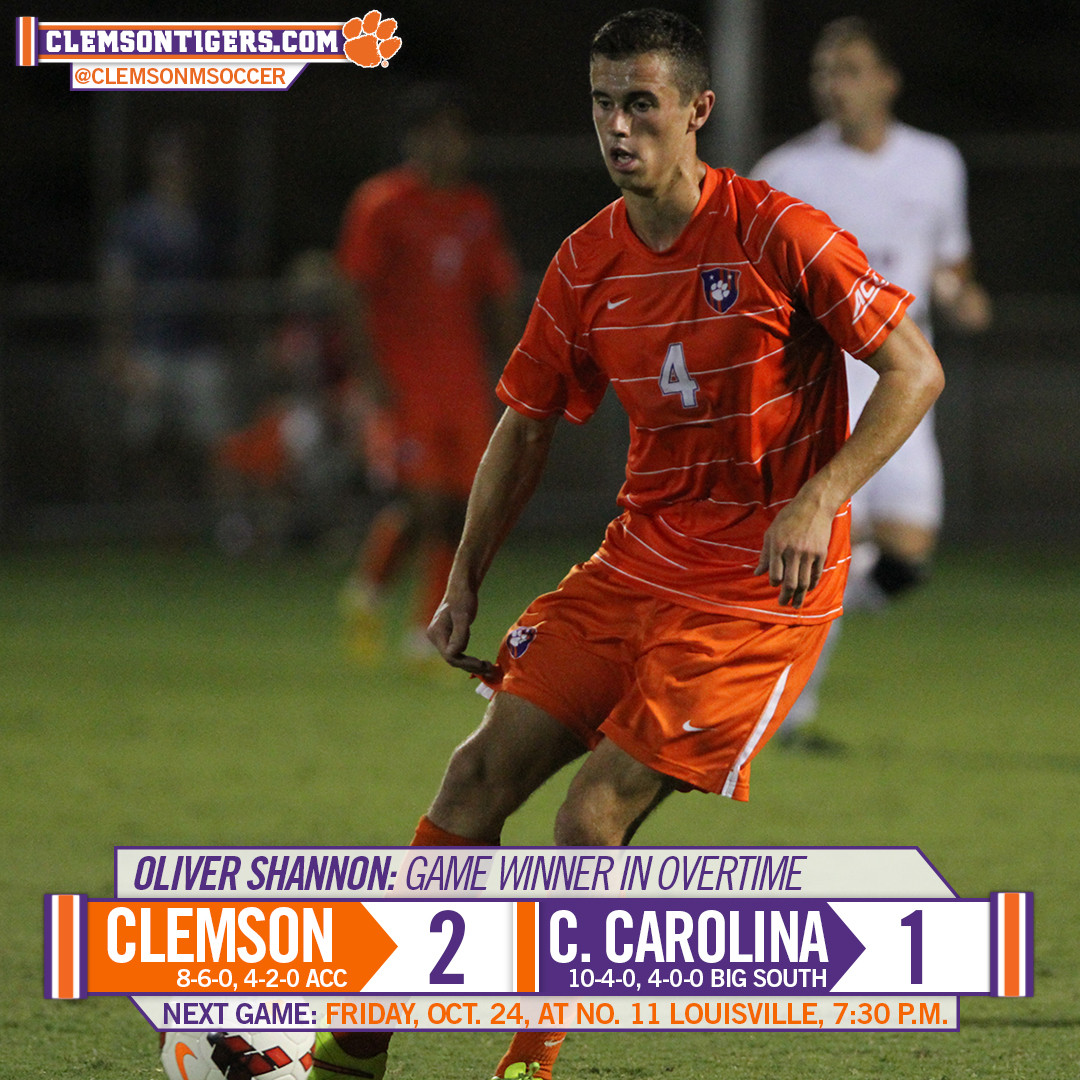 CLEMSON, S.C. – Freshman Oliver Shannon scored his second golden goal of the season and the Clemson men’s soccer team pushed past No. 21 Coastal Carolina 2-1 in overtime Tuesday night at Historic Riggs Field. Clemson improves to 8-6-0 overall on the season and is on a three match winning streak.

Shannon’s third score of the season came off an assist from senior Ara Amirkhanian, his third assist of the season. In a scrum in front of the goal, Amirkhanian touched the ball over to Shannon who took the shot from eight yards out and buried it. The goal gave the Tigers their second overtime win of the season, as they previously defeated Providence by a score of 2-1 in Rhode Island on Sept. 14.

Early in the match, sophomore Alex Happi scored his first goal of the season in the third minute off an assist from fellow sophomore Thales Moreno. Happi headed the ball in from five yards out off a corner kick. That goal ended a 392 minute streak of not allowing a goal for Coastal Carolina, dating back to the Chanticleers’ match against NC State on Sept. 30. So far this season, 13 players have scored a goal for Clemson.

“I thought we came out of the locker room exceptionally well, and controlled the first 10-15 minutes. It’s as well as we have started a game this year,” head coach Mike Noonan said. “Then Coastal came back to get the equalizer, and controlled the game for the first part of the second half, but we were able to regain control.

“I’m proud of this performance, especially coming off of the Virginia game. The consistency was good. That type of effort is a reflection of the character of our team.”

Coastal Carolina’s Elis Bjornsson found the back of the net in the sixth minute off a penalty kick, his third goal of the season. His shot found the lower right portion of the goal and snuck just past Clemson sophomore goalkeeper Andrew Tarbell. The penalty was called after a Coastal Carolina player was taken down in the box.

Tarbell had three saves in his ninth start of the season. He improves to 5-4-0 and now has 20 saves this season. Clemson out-shot Coastal Carolina 17-13 on the night. The Chanticleers held a seven to four advantage in corner kick opportunities.

Clemson embarks on its final road trip of the season on Friday, Oct. 24. The Tigers face No. 11 Louisville at 7:30 p.m. Friday night. Lynn Stadium, the home of Louisville men’s and women’s soccer, was opened at the beginning of this season.