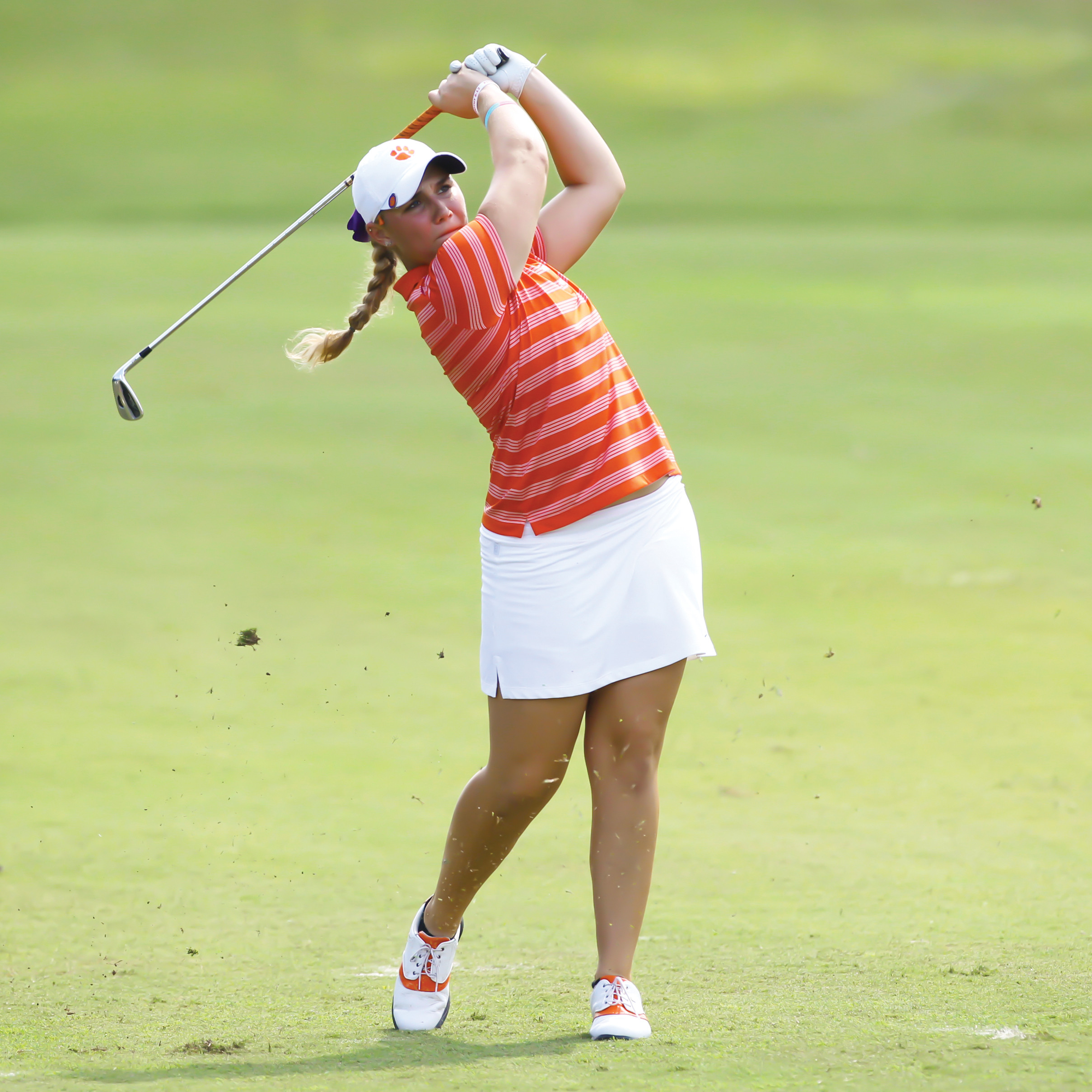 Shanahan Successful on Many Courses

Sloan Shanahan and the Clemson women’s golf program are in their second season of play and looking to build on a successful first season. In 2013-14, the team of four first-year freshmen and two redshirt freshmen came out of the gates firing and didn’t look back.

The team finished second in the first tournament (Cougar Classic) of its inaugural season and had two runner-up finishes. The Tigers finished in the top five in each of their first eight tournaments and were chosen to participate in the NCAA Tournament.

Shanahan knew Clemson was the place for her once she visited.

“I loved the family feel and all the values they presented to people considering Clemson,” said Shanahan. “I stepped on the campus and everything felt right.”

When the sophomore reflected on the program’s first year, she couldn’t help but smile.

“Being a part of the first Clemson women’s golf team was a lot of fun. It was exhilarating but it was a lot of work, too. It was truly an honor. We had a lot of support and that meant the world to us.”

The success the team had in the first year just sweetened the deal.

“It was more than I ever could have dreamed or expected,” admitted Shanahan. “I definitely didn’t expect that to happen. Watching it all pan out…it was like a fairytale.

“Everything came together and it was so nice. It felt very close to perfect. We meshed extremely well and it was great getting to travel around with some of my best friends doing what we love.”

Shanahan found success in the classroom as well as on the course. She became one of only eight student-athletes in Clemson history to earn All-ACC honors both academically and athletically as a freshman and only the second Clemson golfer behind current PGA Tour professional Ben Martin. And of course, she was the first to do it for the women’s golf program, an honor that can’t be duplicated.

“I was honestly more proud of my accomplishments in the classroom than on the course,” she said. “Being able to manage both was such a rewarding feeling. Thinking about those accomplishments motivates me to want to do it again.”

Shanahan does not plan on slowing down this season and wants to continue to excel.

“I would love to be All-ACC in the classroom and on the course again, and I would like to keep my All-America status. I want to keep doing what I’m doing and playing my game. As long as I’m getting better, that’s all I expect of myself.”

Shanahan, one of two captains on the 2014-15 squad, embraces her leadership role this season.

“I love it,” she grinned. “I obviously don’t know everything about the college golf world yet, but I believe I learned a lot last year and have a good idea of how things operate and what’s to be expected.

“I love being able to share my experiences. We have two talented freshmen this year and I just want to do what I can to help them and help this team be the best it can be.

“We try not to judge each other on numbers but rather on attitude, reaction to adversity and composure, because if you’re doing things right off the course, they’ll fall into place on the course.”