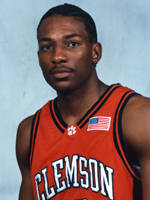 Editor’s Note: Over the next nine weeks, Clemsontigers.com will feature a men’s or women’s senior basketball student-athlete each Monday.

“I have been playing since I was born,” said the soft-spoken Douglas, who has continued his lifelong passion as a walk-on member of Clemson’s team. The 6’3″, 185-pound senior has become an intricate part of the Tigers’ rotation, and he has managed to do so through hard work and dedication.

“What keeps me going is playing in practice,” said the Rock Hill, SC native. “Since I came to Clemson, I do not think I have lost any love for the game. In fact, I think it has grown stronger.”

Despite the lack of game minutes usually associated with walk-ons, Douglas continues to come to practice everyday; but, his day typically does not end with the final whistle. His love for the game not only has helped him keep his commitment to the team, but also has encouraged him to put in extra time on the court.

“My freshman year, I did not expect to play; but I just loved to play so much that after practice, I would go to the gym on campus and play for three more hours,: he said. “It is just so much fun to play.”

Douglas’ lifelong experience, commendable work ethic and love for the game have all contributed to another important factor of his game: his confidence, which has risen since he came to Clemson. But Douglas claims that sometimes, his role as a walk-on is a harsh reminder of how hard he must work to get to his game where he wants it to be.

“The hardest part about my position is not getting playing time when I feel like I deserve to,” he says. “Maybe it is just my confidence, but I believe that I can put my game up against anybody and I can compete. Sometimes, I think that to have the type of ability that I have, and still not be able to play just because I am a walk-on, that makes it tough.”

Douglas’ collegiate career, however, has not always been an uphill climb. In his four-plus years as a Tiger, he has been a part of some of Clemson’s finest moments in recent memory and has also recorded significant playing time.

“My highest moment was when we beat number-one ranked North Carolina two years ago,” says Douglas, who was also a reserve on the 1999 Clemson team that reached the finals of the NIT tournament. In addition to being a member of some of Clemson’s greatest triumphs, Douglas has also had the opportunity to play with some of the best basketball players in Clemson history and also in the world. This list includes former Tigers Will Solomon and Johnny Miller, and it also includes NBA all-star Tracy McGrady.

“When I came to tryouts and saw who was out there, I knew I could make the team,” says Douglas. “And after keeping up with guys like Will Solomon and Johnny Miller, I knew I could only go up from there.”

Through his confidence, Douglas admits that the support he has received has helped him accept his position.

“My religion has helped me stay focused. I know that God has a plan for me, and I know that I am going to be successful at whatever I do. I have also learned that when things are not going in my favor, I have to remember that I am building my self-character; and in the end, I will be happy doing whatever it is that I do.”

“I also want to thank my mother, my father, and my girlfriend Randi. They have all been there for me and given me so much.”

After he sat out the ’99-’00 season to focus on his studies, Douglas returned to the team for the ’00-’01 season and has been a solid role player ever since. Coming into the ’02-’03 season, Douglas has totaled 21 points and 10 rebounds in 34 career minutes, making him a very productive player on the court. In addition to his on-court performance, he was named to the ACC Academic Honor roll last year.

While it is clear that he would like to see more playing time, Douglas and the Clemson coaching staff have a strong understanding. “Coach (Larry) Shyatt and I have talked about my situation,” says Douglas. “Last year, he had a lot of confidence in me, and I knew I was just one spot away from getting more playing time. This year he is just as confident in me, and I know that if somebody goes down with an injury, I have to be ready to step up and go in.”

Coach Shyatt has openly advocated Douglas’ current role on the team. “Jermel is one of the best walk-on players in the country,” he said. “Do not be surprised if he is in our rotation this year. He is a fifth-year senior, the only one on the team, and he has earned the respect of all the coaches and his teammates on this Clemson team.”

The effect that Jermel Douglas has had on this year’s Clemson squad is apparent in the team’s desire to succeed. “We have a lot of drive this year,” he says. “We have a sick taste in our mouths from some of the losses we have suffered in recent years. We know how good we are and we believe that we can play with anyone in the country.”

After a 10-1 start, the team’s best since 1996, it appears that Clemson has adopted the same work ethic, level of confidence and love for the game that its most experienced player, Jermel Douglas, has carried with him since the beginning of his career as a Tiger.