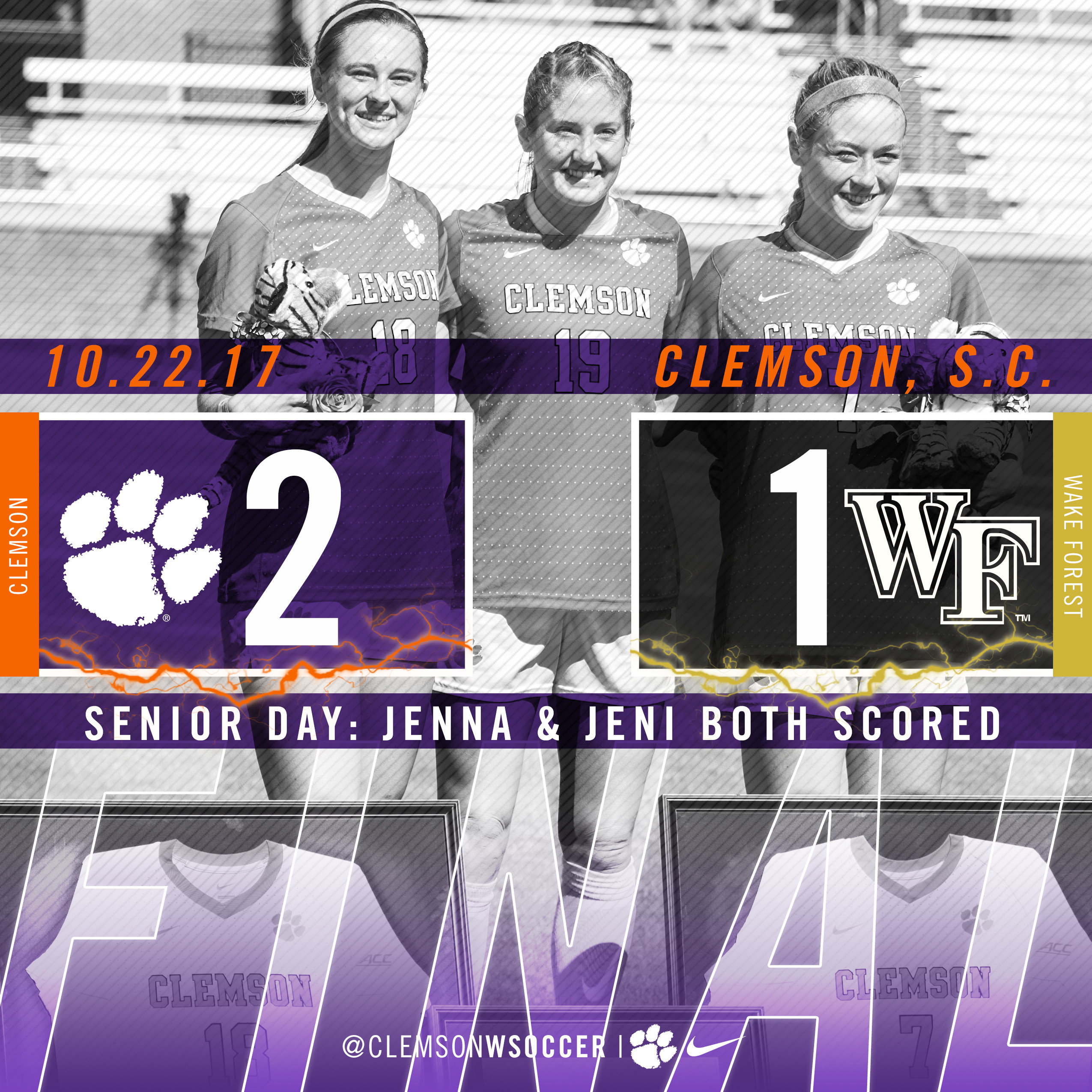 Senior Class Leads the Way in 2-1 Victory Over No. 15 Wake Forest

CLEMSON, S.C. – Jenna Polonsky and Jeni Erickson celebrated their Senior Day in grand fashion, each scoring a goal to lead the Clemson women’s soccer team to a 2-1 victory over No. 15 Wake Forest on Sunday afternoon at Historic Riggs Field. With the win, Clemson improved to 9-5-2 overall and 3-4-2 in conference play, while Wake Forest slipped to 10-3-4 and 4-3-2.

“It was a great win today against a very good Wake Forest team,” said Head Coach Eddie Radwanski. “We were led by our seniors today, and our girls wanted to honor them with it being senior day. Jeni, Shannon and Jenna started right from the kickoff. We put our imprint on the game and to jump on a very good team like Wake Forest, to get a 2-0 lead is pretty spectacular. It couldn’t have happened to a better group of kids, Jenna has been with me every year I have been a coach here except for one. We had some bounces of the ball this year not go our way and we made our own luck and took good chances. The first half was an excellent performance by our part and those are the moments in the game that can decide it. We made a boo-boo but we kept our wits about ourselves, and at the end of the day you are trying to get three points, and it was three points against a very good team that will help us with the ACC and NCAA tournament. Collectively it was a group that worked hard together today to earn the victory.”

In the first half, the Tigers jumped out to an early lead as Julie Mackin carried the ball up the far side of the field, crossing it into the box to Mariana Speckmaier on the near side. Speckmaier flicked it on to Polonsky, who took aim and fired off the first shot of the match. The Winston-Salem, N.C. native scored her sixth goal of the season to give Clemson a 1-0 lead.

In the 24th minute, Sam Staab sent a cross into the box, connecting with Polonsky who headed it towards the cage. Senior Jeni Erickson was there to tap it in, doubling the lead. The goal marked Erickson’s fourth of the season. Clemson carried the 2-0 lead into the half.­­

In the 52nd minute, the Demon Deacons cut the lead in half to 2-1, as they intercepted a pass inside the box, scoring from 10 yards out. The Wake Forest back line held the Tigers to only two shots in the second half, one by Polonsky and the other by Miranda Weslake.

For the match, Wake Forest outshot Clemson 14-7, and 5-2 in shots on goal. The Tigers earned four corner kicks, while the Demon Deacons had nine. Sandy MacIver faced 14 shots and recorded five saves in the 90 minutes of play, picking up her seventh win in net for Clemson this season.

The Clemson women’s soccer team returns to action on Thursday, Oct. 26 as they host No. 18 Florida State at Historic Riggs Field. The match is slated for a 7 p.m. start.