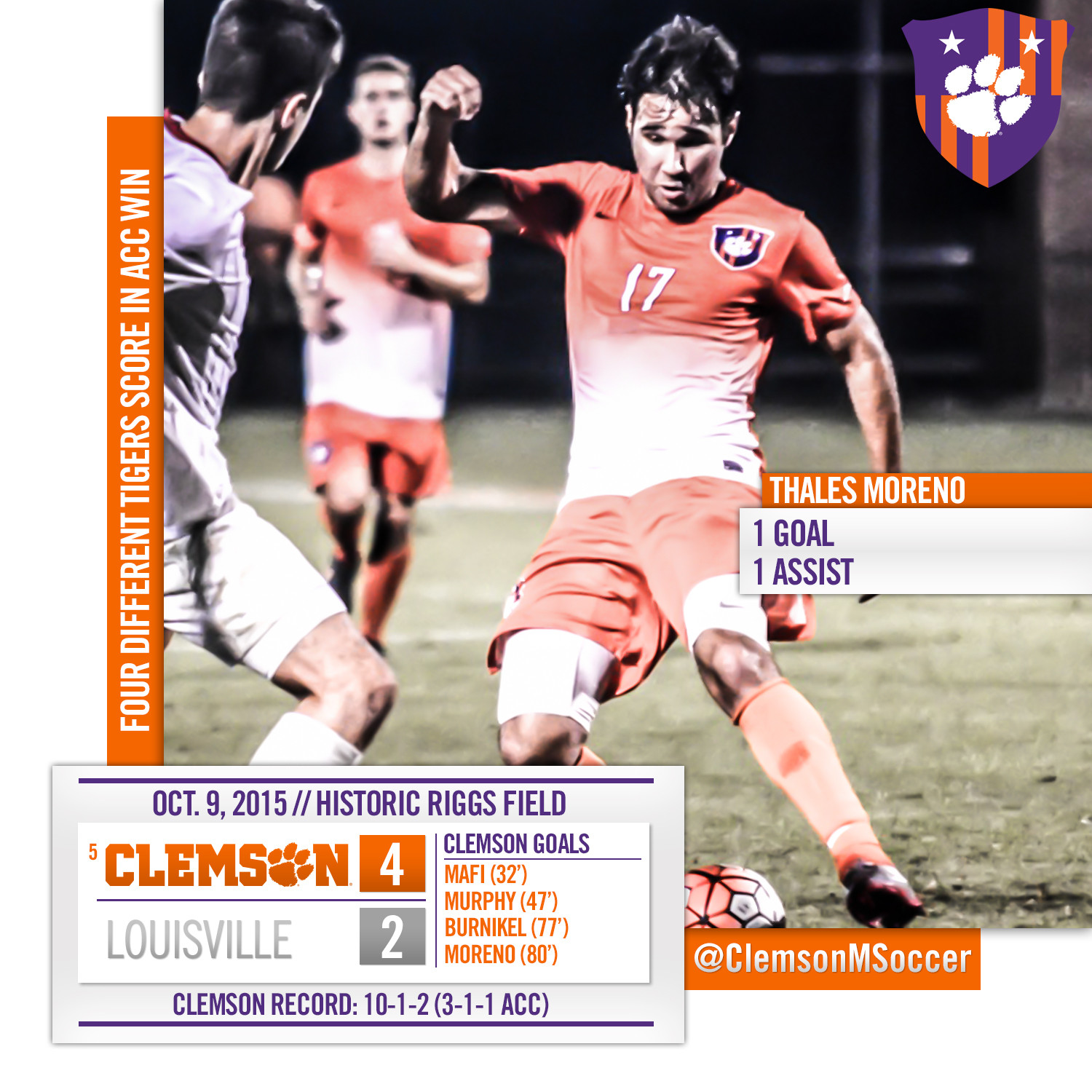 Second Half Offensive Burst Lifts No. 5 Tigers Over Louisville Friday

“I thought we played too negatively in the first half. We did change our mentality coming out of the half, and scoring the second goal quickly helped,” said Head Coach Mike Noonan. “In general, the consistency in our play has to be better. I think that mental fatigue played a bit of a role tonight. We had a tough road game at Charlotte on Tuesday and came back today on short rest, and it showed.  Overall though, I’m very proud. It was a good week with two wins against two good teams.

“The crowd was once again unbelievable tonight,” Noonan added. “I think it’s the reason why we scored so many goals. This team loves to play at Riggs and in front of our fans.”

Junior Iman Mafi scored on a penalty kick in the 32nd minute to give Clemson a 1-0 lead in the first half. The goal was Mafi’s third of the season, and his second successful penalty kick in two games this week, as he also scored on a PK in the Tigers’ 1-0 victory at Charlotte on Tuesday. Junior forward Austen Burnikel made a run inside the box when he was fouled by a Louisville player, resulting in the penalty kick.

The Cardinals answered six minutes later when Tim Kubel connected on a diagonal shot from outside the 18-yard box that went into the top left corner of the net just out of the reach of Clemson keeper Andrew Tarbell. Kubel’s goal was the first scored on Tarbell in 334 minutes of play, ending the redshirt junior’s streak of solo shutouts at three games.

The Tigers came out firing from the start of the second half, regaining the lead in the 47th minute following a corner kick handled by senior Paul Clowes. Clowes sent the corner across the field, connecting with the head of senior Kyle Fisher. Fisher headed the ball back to fellow defender, freshman Patrick Bunk-Andersen. Bunk-Andersen’s header centered the ball in front of the goal, where redshirt senior Kyle Murphy headed it in for his fourth goal of the year.

Clemson scored its third goal of the match in the 77th minute, when junior Thales Moreno passed from the top of the box to sophomore Diego Campos on the right side. Campos crossed the ball in front of the net to Burnikel who scored from close range. Moreno added a goal of his own three minutes later, while Bunk-Andersen picked up his second assist of the night on the play. Daniel Johnson netted the Cardinals’ second and final goal in the 83rd minute to provide the final margin of 4-2.

For the game, each team took 16 shots, while the Tigers held a 6-3 advantage in corner kicks. There were 12 fouls whistled on the Cardinals and 19 on Clemson in the contest. Tarbell picked up four more saves to add to his ACC-leading total, which is now 42 on the season.

The Tigers travel north next week to face Syracuse on Friday, Oct. 17. The match against the Orange is slated for a 7 p.m. start.