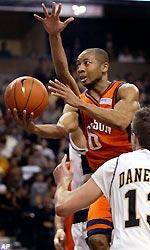 Clemson guard Edward Scott received another honor on Tuesday when he was named to the United States Basketball Writers All-District III team. The team covers Division I players from the states of Maryland, Virginia, North Carolina and South Carolina.

Scott was joined on the team by Josh Howard and Vytas Danalius of Wake Forest, Steve Blake and Drew Nicholas of Maryland, Travis Watson of Virginia, Julius Hodge of NC State, Dahntay Jones and J.J. Redick of Duke, and Brett Blizzard of UNC-Wilmington.

Scott, who was named first-team All-ACC on Monday, led the Tigers in scoring this year with an 18.0 average. He also averaged 5.5 assists per game and shot 38 percent from three-point range. He needs just 15 points and two rebounds to become the first player in Clemson history to accumulate 500 points, 150 assists and 100 rebounds in the same season.