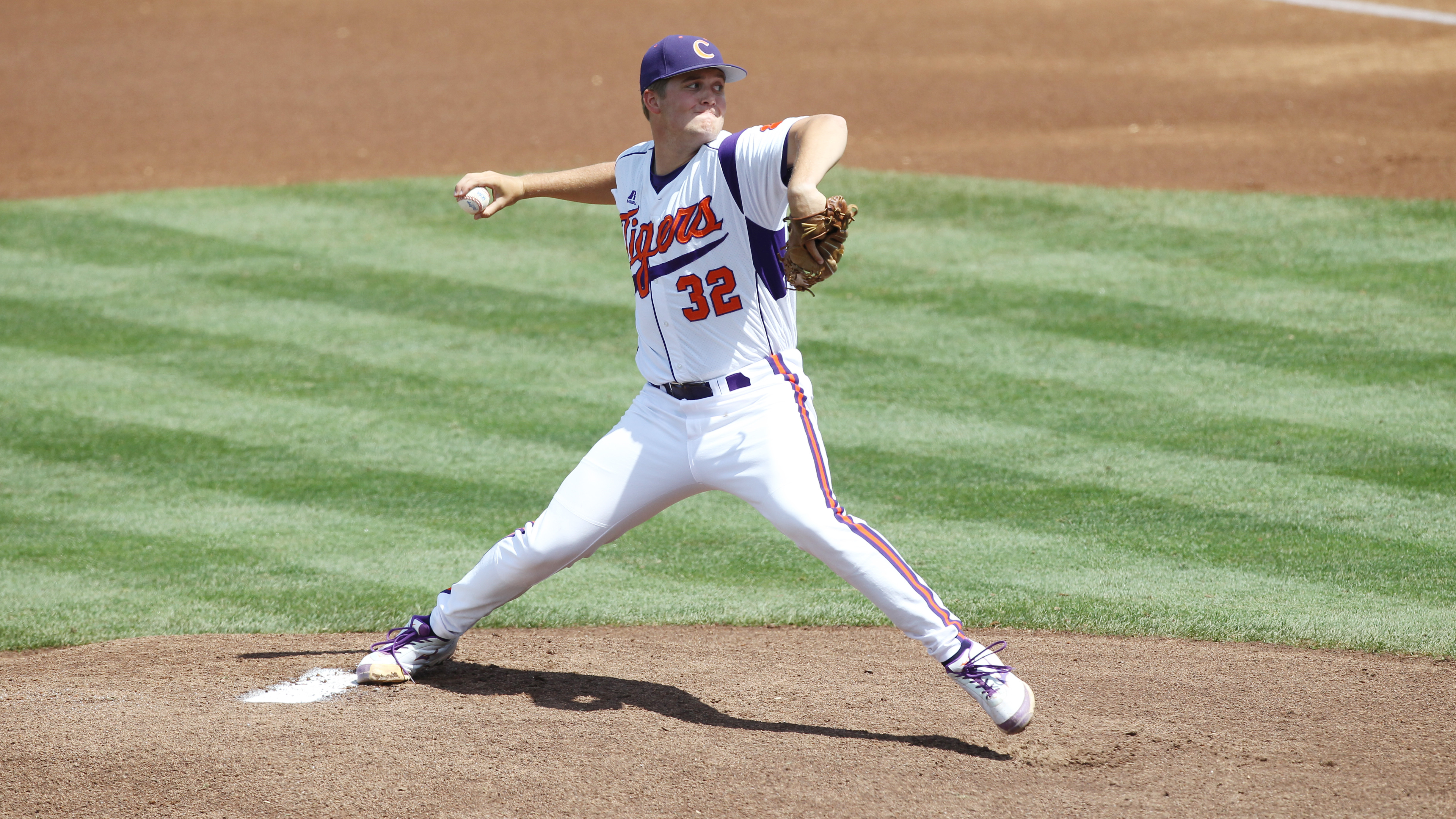 GREENSBORO, N.C. – His gritty performance deserved better than taking the loss, but Clate Schmidt earned a round of applause from the crowd at NewBridge Bank Park when he exited with one out in the ninth inning Friday.

He probably earned himself a bigger role on the Clemson pitching staff as it turns its focus to NCAA Tournament play.

The Tigers (36-23) mustered only four hits and fell to Georgia Tech 3-0 to end their hopes of playing for an ACC title, but believe they did enough to secure an NCAA Tourney bid when the field is announced Monday with wins in their first two games in Greensboro.

“I would hope so,” said Head Coach Jack Leggett. “We played tough in this tournament. It’s a tough conference and we finished second in our division and fifth in the conference, won two games here, beat Duke, beat Miami and played tough today. We’ve got a good baseball team. I’d be shocked and disappointed if anything else happened.”

Schmidt worked a career-long 8.1 innings, allowing eight hits and two runs, and repeatedly pitched out of jam after jam after jam to give his offense a chance.

The Tigers were never able to convert on those chances, however, and Mott Hyde’s two-run homer off reliever Matt Campbell soon after Schmidt departed all but sealed the deal.

“Both teams battled and they came out on top,” said Schmidt. “The defense behind me played great. I got myself in a couple of bad spots, but they got me out of it. I can’t be mad at them because they’ve bailed me out plenty of other times.”

Leggett and Pitching Coach Dan Pepicelli told Schmidt there was a chance he would start Friday prior to the start of the ACC Tournament. He had been steady, mostly in midweek duty, while other options for the third-starter spot struggled, and Schmidt learned late Thursday night he would get the nod.

Schmidt stranded two Georgia Tech runners in each of the first three innings and worked his first 1-2-3 inning in the fourth, needing just eight pitches to get through the frame.

The Yellow Jackets broke through in the fifth inning with four straight singles to start the inning, bringing in Daniel Spingola with the game’s first run. But Schmidt fought back to strike out A.J. Murray looking and got Connor Justus to ground into a double play to avoid further damage.

“He did a great job for us, that’s all there is to it,” stated Leggett. “I had a really good feeling about him going into the game and he proved to be the right guy against them and pitched out of some jams early.”

Schmidt worked out of yet another jam in the seventh, when two hits and an error put two men in scoring position with two outs, but Schmidt got Murray to bounce to second to quash the danger and keep the deficit at 1-0.

Already over 100 pitches going into the eighth inning, Schmidt needed just eight more pitches to retire the side.

He hit the leadoff man with a pitch in the ninth inning but recorded one out on Spingola’s sacrifice bunt before making way for Campbell, who gave up Hyde’s two-run blast on a full count to the first batter he faced.

“I wish I would have left Campbell in a little better spot coming in,” admitted Schmidt. “But I’ll give Campbell that ball 10 out of 10 times. I trust that man more than anyone. I feel really confident about the next games and coming into the regional.”

Clemson managed just four hits against Georgia Tech’s tandem of Dusty Isaacs, who made his first start of the season, and Sam Clay, and its run in Greensboro came to an end.

The Tigers brought the tying run to the plate with one out in the ninth inning, but neither Shane Kennedy nor Chris Okey were able to reach.

“The best thing we found out today is we’ve got a good third starter,” said junior Garrett Boulware. “I’m just glad we found that. We didn’t hit well today, but we’re a good hitting team. So if we can get all those things clicking together, I think we’ll do some damage in the postseason.”