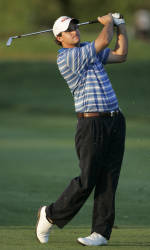 The performance, two shots lower than Saunders’ personal competitive best, included a bogey, eight birdies and an eagle. The latter came on the par-5 finishing hole where he teed off with a 3-wood and ripped a 3-iron 228 yards uphill to within 20 feet of the pin. He rolled in the downhill, sidehill putt for eagle.

“That was a tough putt and I was just trying to cozy it down there close. It was a little bit of a shock when it went in,” said Saunders, 19, of Orlando, Fla. He’ll take a three-stroke lead into today’s second round.

Saunders has a three shot lead over four golfers entering the second round on the par 72 course. Clemson’s Kyle Stanley, the number-one ranked amateur player in the world according to Golfweek, is in 10th place after the first round with a 69. Clemson assistant golf coach Jordan Byrd is in 50th place after firing an even par 72. Tanner Ervin is in 75th place with a 74, while Phillip Mollica and David May are tied for 95th after opening round 75s.

Play continues on Thursday with the second round at the 7204 yard course.