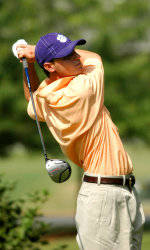 Saunders and Stanley Tied for Lead at Southern Amateur

Clemson, SC– Clemson teammates and classmates Kyle Stanley and Sam Saunders are tied for the lead with two other golfers after the second round of the 101st Southern Amateur at Dogwood Course at the Country Club of North Carolina in Pinehurst, NC.

The Tiger sophomores stand at eight-under par 136 after 36 holes.

Stanley is the defending champion in the event and is the number-one rated amateur in the world according to Golfweek magazine.

Stanley and Saunders are tied with Osborne Garrett of Birmingham, AL and Wake Forest player Webb Simpson, a native of Raleigh, NC.

The 72 hole event continues on Friday on the par 72 course.

Saunders had the first round lead after a course record 63. The native of Orlando, FL slipped to a 73 in the second round, but his 136 total is still tied for the lead.

Stanley fired a 67 on Thursday after an opening round 69. His Thursday round included an eagle on the par five ninth hole, the second straight day he has eagled that hole.

Ervin rose from 75th to 18th with the performance and stands at four-under par 140 after 36 holes. Clemson junior Phillip Mollica, who recently won the North-South Amateur in Pinehurst two weeks ago, had a solid round of 69 on Thursday and stands in 53rd place at 144 after two rounds. David May also made the cut with a 70 on Thursday and his 145 after two rounds is tied for 60th.

Clemson assistant coach Ben Martin, an All-ACC golfer for the Tigers this past season, had a 71 on Thursday as well, but his 150 total for 36 holes was not good enough to make the cut.