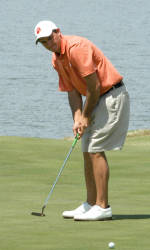 Clemson, SC — Phillip Mollica had the top round among six Clemson golfers at the Southern Amateur at the Country Club of North Carolina in Pinehurst on Friday. Mollica, who won the North-South Amateur in the same city two weeks ago, had a round of two under par 70 on Friday.

Mollica was the only active Clemson golfer under par on Friday in the 72 hole event that concludes on Saturday on the par 72 Dogwood Course. Mollica had an opening round 75, but has come back with rounds of 69 and 70. His 214 score is tied for 27th.

Sam Saunders and Kyle Stanley were both tied for the lead after the second round, but both slumped Friday and dropped out of the top 10 in the competitive national field. Saunders had a second straight round of 73 and his 209 total stands in 11th place entering the final round. He has the best 54-hole score among the Clemson golfers and his seven under par score is five shots off the lead of 12 under par by Wake Forest golfer Webb Simpson.

Stanley had a third round 78, tied for his high round of the summer and dropped from first to 27th place. He is tied for 27th at 214 entering Saturday’s final round. Stanley is the defending champion in the event.