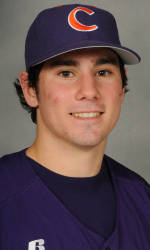 Graduate righthander Justin Sarratt pitched 7.0 strong innings of four-hit ball to lead Clemson to a 7-2 win over Presbyterian College at Doug Kingsmore Stadium on Tuesday night. The Tigers improved to 19-13 overall, while the Blue Hose dropped to 18-16 on the season. The teams split the two-game season series, as Presbyterian College topped the Tigers 4-3 at Fluor Field in Greenville, SC on March 16.

The Blue Hose held a 1-0 lead into the fourth inning before Richie Shaffer tied the score with a solo homer in the fourth. Clemson added four two-out runs in the fourth inning and never looked back. In the meantime, Sarratt was in the process of facing the minimum during a 19-batter stretch from the first inning through the seventh.

Sarratt (2-1) earned the win by allowing just four hits, two runs (one earned), and one walk with two strikeouts in 7.0 innings pitched, his longest outing since 2009. He threw only 91 pitches as well. Scott Weismann struck out all three batters he faced in the ninth inning. The three Tiger pitchers combined to allow just five hits and one walk with seven strikeouts in the game.

The Blue Hose took advantage of a Tiger error in the first inning to take the game’s first lead. Andrew Williams reached on a throwing error by third-baseman John Hinson after he hit a slow roller on an 0-2 pitch and advanced to second base on the play. Mack Hite followed with another slow roller in nearly the same spot and reached on a single when Hinson misjudged the ball. Hite was retired at second base on Brad Zebedis’ fielder’s choice as Williams held at third. After Zebedis was picked off first, Tony Micklon belted a two-out double off the fence in left-center to score Williams.

In the second inning, left-fielder Jeff Schaus robbed Gabe Grammer of a leadoff home run when he reached over the fence and snagged the ball.

Shaffer led off the fourth inning with an opposite-field, solo home run to right-center, his fifth long ball of the season, to tie the score. Shaffer hit the homer on a 2-2 pitch and on the ninth pitch of his at-bat after fouling off four two-strike pitches. Brad Miller followed with a bunt single. Two batters later, Dominic Attanasio lined a one-out single to right-center that moved Miller to third, but Attanasio was retired at second trying to stretch the single into a double. After Jon McGibbon walked, Jason Stolz bounced a two-out single over third-baseman Tyler Hill’s head to score Miller and moved to second base on the throw to third base. Hinson then flared a single to right-center to plate McGibbon and Stolz. Phil Pohl kept the rally going with a double to right-center to score Hinson, giving Clemson a 5-1 lead.

In the bottom of the fifth inning, Will Lamb laced a two-out single to center, stole second, and scored when Williams slipped on Attanasio’s hard grounder and was unable to field the ball on the single.

Hinson added to the Tigers’ lead in the sixth inning when he lined a solo home run to right field, his fourth long ball of the year.

In the eighth inning, Grammer led off with a walk and scored on Horton’s double to left-center. Hill laced a single through the left side to advance Horton to third, but John Wagner and Williams both struck out and Hite grounded out to end the frame and keep the Tigers ahead 7-2.

Five different Presbyterian College players accounted for the team’s five hits. Micklon and Horton both had a double and RBI.

Clemson will travel northward to face Boston College in a three-game series at Commander Shea Field starting Friday at 2:30 PM.