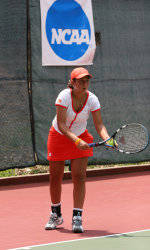 CLEMSON, SC – Clemson women’s tennis player Carol Salge will begin competition at the 2006 ITA National Intercollegiate Indoor Championships on Thursday. The four-day event will be held at The Racquet Club of Columbus and hosted by The Ohio State University.

With Salge’s invitation to the tournament, Clemson has sent a representative to the ITA National Indoor in each of the past five years. Last season, current sophomore Federica van Adrichem earned an automatic bid after winning the ITA Southeast Regional, while former Tiger standout Julie Coin participated in the annual tournament the three prior years.

Salge, a native of San Roque, Brazil, has compiled a 5-2 record during the fall season. She advanced to the quarterfinals of the Wilson/ITA Southeast Regional last month with wins over Emily Wade of UNC-Greensboro (6-2, 6-1), Amanda Taylor of Vanderbilt (6-1, 6-3) and Liz Plotkin of Duke (6-3, 6-4) before falling to Middle Tennessee’s Hala Sufi in three sets (2-6, 7-6(2), 3-6). Salge also reached the final 16 in the qualifying round of the Riviera/ITA All-American Championships in early October.