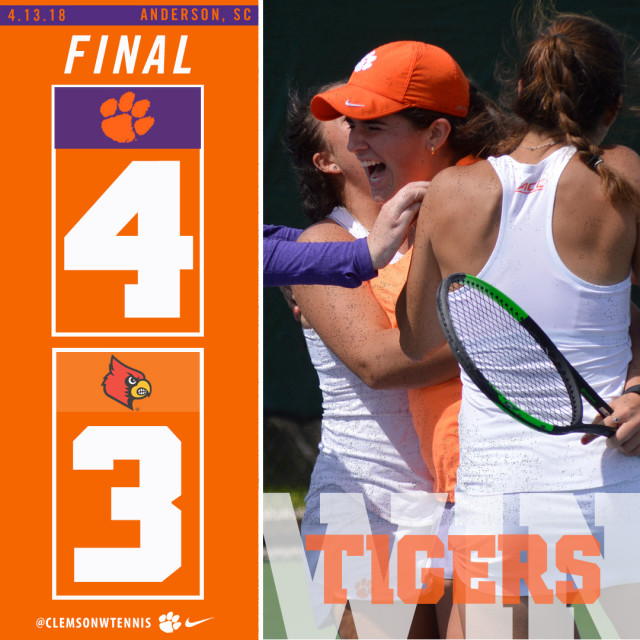 ANDERSON, S.C. – The ending of her Senior Day could not have been more perfect for Daniela Ruiz, who was the last match on court and clinched the 4-3 victory for her Clemson team over Louisville on Friday afternoon at the AU Tennis Facility in Anderson, S.C. With the win, the Tigers improved to 12-10 (5-6 ACC), while the Cardinals dropped to 13-9 (3-8 ACC) with the loss.

Louisville won the doubles point, defeating the Tigers at No. 1 and No. 3, in that order. Ally Miller-Krasilnikov and Tate Schroeder won their match at No. 2 doubles, 6-3.

With the score tied 3-3, the result of the match came down to Ruiz at No. 6 singles, who had lost the first set (3-6), won the second (6-2), and was in a tiebreak in the third. With the match on the line, the native of Beni, Bolivia playing in front of several family members who traveled to the match for her Senior Day, never trailed in the tiebreak, ultimately winning 7-4. The win was Ruiz’s sixth in a row, and she has now clinched the team victory in the Tigers’ last two wins.

The Tigers return to action on Sunday, April 15 at 12 p.m. when they host the number-one team in the nation, North Carolina. The match will be played at Mickel Tennis Center on the campus of Furman University in Greenville, S.C.