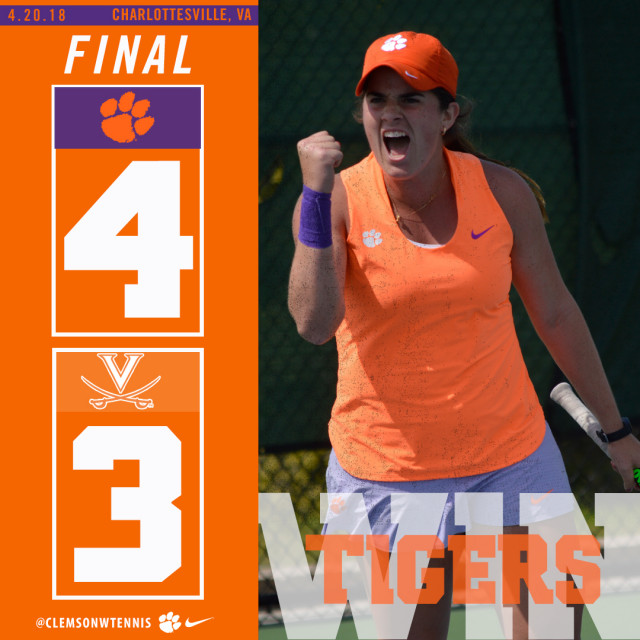 Ruiz, Tigers Win in Thrilling Fashion Friday at No. 22 Virginia

CHARLOTTESVILLE, Va. – For the second week in a row, senior Daniela Ruizled the Clemson women’s tennis team to a thrilling ACC victory, this time, a 4-3 upset over No. 22 Virginia on the road in Charlottesville, on Friday afternoon. It was a crucial conference win for the Tigers, who improved to 13-11 (6-7 ACC), while the Cavaliers dropped to 14-7 (8-5 ACC).

With the match tied at 3-3, the result was left in the hands of Ruiz at No. 6 singles. The native of Beni, Bolivia won the first set 6-0 and lost the second 5-7, and was headed to a third set against the Cavaliers’ Erica Susi. The two players traded points in the third set, ultimately leading to a score of 6-6 and a tiebreak, which Ruiz won handily, 7-2. It was the second-straight Friday that Ruiz clinched a 4-3 ACC victory for the Tigers, as she also did so on April 13 in a 4-3 Clemson home win over Louisville, which was also her senior day. The three-year team captain has been responsible for clinching the win in Clemson’s last three victories.

The Tigers next travel from Charlottesville, Va. down to Atlanta, Ga. for an April 22 contest against third-ranked Georgia Tech. First serve between Clemson and the Yellow Jackets is set for 2 p.m. on Sunday afternoon.