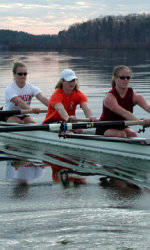 The Tiger rowing team played host to four schools in the Solid Orange Clemson Challenge regatta Saturday. Clemson took first place in four of the five races to continue its strong start to the spring season. Competing in the event were Indiana, Buffalo, Marist, and Purdue.

The event began with a dedication of Clemson’s newest 8+ racing shell. The boat, named Fearful Symmetry, was christened by associate athletic director and senior women’s administrator Linda White. The boat’s name comes from the poem “The Tiger” by William Blake, which was read Saturday morning by Clemson senior rower Ashlee Brown.

Clemson’s performance on Saturday was highlighted by four wins, including a dominant performance by the second varsity 8+. The Tigers had just one entry in the seven-boat race, but were victorious in a time of 6:59.6. Clemson had slight open water over Indiana at the 1000m mark, but pulled away to an easy win over the Hoosiers in the last 500 meters. Indiana was second with a time of 7:11.6 and Marist finished third at 7:19.4. Two boats from Buffalo battled out in a photo finish for fourth place.

“The second varsity 8+ had an amazing race,” said Susie Lueck, Clemson head coach. “They put together the pieces we worked on this past week. I am proud of their unity. They continue to check accomplishments off the list.”

The Tigers swept the two novice races (novice 8+ and second novice 8+). In the novice 8+ race, Clemson and Buffalo jumped out to an early lead. The race was tight between those two in the last 500 meters, but way out in front of the other boats. Clemson won with a time of 7:16.5, 10 seconds better than Buffalo. Purdue, Indiana, and Marist rounded out the five-boat race.

“The novices raced very well today,” said Lueck. “They have continued to make improvements and find speed in recent practices. I am excited to see them continue to find more speed through their drive and determination.”

Clemson’s fourth win of the day came in the varsity 4+, where the Tigers had two boats against only Purdue. The two Clemson boats found open water over Purdue early in the race. Clemson’s A boat had a slight open water lead over the B boat at the 1,000m mark. In the last 500 meters, the A boat pulled away to win by a half-boat length over Clemson’s B boat. The winning time was 8:05.3, with the B boat coming in at a time of 8:08.7.

The Tigers’ varsity 8+ boat finished second to Indiana. The Hoosiers cruised after opening with a four-seat lead by the 500m mark. Indiana had open water over Clemson by the 1,000m mark. Clemson pulled away from the rest of the field in the last 500 meters to claim second place with a time of 7:02.3, nearly 10 seconds behind Indiana. Purdue came in third at 7:07.5, while Buffalo (7:08.2) and Marist (7:26.5) claimed the final two spots.

“The first varsity 8+ had a disappointing race,” Lueck said. “They did not perform the way they have all month. Today was a wake-up call and an opportunity to identify areas to improve.”

Clemson will train at home on Lake Hartwell during spring break, which starts Monday for the University. The Tigers travel to Oak Ridge, TN to take on Cincinnati and Dartmouth on Saturday, March 26.