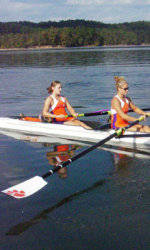 The Clemson rowing program completed its eighth season as a Division I intercollegiate athletic team in 2006. Susie Lueck, head coach at Clemson each of the eight seasons the school has fielded a rowing team, got a first-hand look every day at the construction of the program’s new boathouse facility. The upgraded boathouse, expected to be one of the top facilities in the nation, will be a big boost to Clemson’s program in terms of both recruitment and training. As of the ACC Championships on April 22, 2006, framing for the project was well underway.

The fall of 2005 was an exciting time for the Clemson rowing team. The Tigers competed in a number of nationally-respected events and also hosted a pair of races on its home course at Lake Hartwell. The season began with the Tail of the Tiger for the second consecutive year. Like the 2004 regatta, Clemson dominated each of the events held. The Tigers’ varsity 8+ B team finished its race under 20 minutes, ahead of the A team. Clemson went on to win all races, the novice 4+, novice 8+, and varsity 4+. The Clemson University Rowing Association and the University of Georgia competed with the Tigers in those races.

On October 8, 2005, the team competed on the Tennessee River in the Chattanooga Head Race. At that competition, its main focus was South Region foe Tennessee. The Volunteers won the championship 8+, while Clemson’s A boat finished third with a time of 16:45.4. The Tiger team won the novice 4+ and also the novice 8+, cruising to a time of 18:20.2 in that event. In the championship 4+, Clemson was third behind a pair of UT crews.

The prestigious Head of the Charles took place in Boston, MA on October 23, 2005. At that event, Clemson finished 19th out of 47 teams in the championship 8+ race. The Tigers put together a time of 17:52.7. Three weeks later, Clemson ended the fall season against stiff competition at the Rivanna Romp in Charlottesville, VA. The Tigers’ novice 8+ defeated the likes of Cincinnati, Tennessee, and hometown favorite Virginia to win their race. Another highlight from the Romp was the performance of the varsity 4+, which finished third behind a pair of boats from the University of Wisconsin.

The 2006 spring season began with a pair of dual regattas, first against Eastern Michigan and then Boston College. The Tigers swept both events, winning all races held between the schools. Against the newest ACC rival Boston College, the novice 8+ and varsity 4+ crews pulled out tight victories to help claim the sweep.

On March 18, 2006, the Tiger rowing team played host to a number of schools from the Midwest for the Clemson Challenge. As has been the case in years past, Indiana, Marist, Penn, and Purdue headed to the Southeast during their team’s spring break to train in warmer weather. The Tigers welcomed the schools to an exciting regatta in the morning, and then Clemson and Penn went head-to-head in the afternoon.

The following weekend, the Tigers’ varsity crews headed off to Southern Cal for a head-to-head matchup in the Port of Los Angeles. The varsity 8+ crew had a season-best time of 6:37.6 in a race against the Trojans.

On April 1, Clemson hosted yet another event on Lake Hartwell. This time, the Tigers welcomed Central Florida and North Carolina to a four-race regatta. The Golden Knights of UCF claimed first in each of the four events, while Clemson was runner-up in all four races. The Tigers’ best performance that Saturday was in the second varsity 8+, where UCF finished in 6:57.0 and Clemson right behind at 6:58.9.

Clemson headed back to the West Coast to take on three nationally-ranked programs at Redwood Shores, CA. The Tigers raced against Stanford, UCLA, and Washington State and saw plenty of tough competition from the Pac-10 schools. It was the final tune-up for Clemson before playing host to the seventh annual ACC Championships.

For the first time ever, the ACC Championship regatta featured a full field of six teams. For the seventh straight year, the University of Virginia claimed the team title. The Cavaliers beat out Duke, while Clemson finished fourth in the overall standings. Clemson’s top event was a second-place finish in the varsity 4+. That boat turned in an outstanding time, a season-best, of 7:40.3. At the conclusion of the event, Clemson rowers Sarah Cooper and Jaclyn Rath were named to the All-ACC team. It marked the second such honor for Cooper, a junior from Westminster, SC. She is the third Clemson rower ever to earn multiple all-conference honors. It was the first All-ACC honor for Rath, a senior from Franklin, TN.

Clemson concluded its season eighth among South Region schools at the Aramark Central/South Sprints in Oak Ridge, TN. The Tigers’ novice 8+ boat finished fifth in the grand finals at that regatta, which was held again on Melton Hill Lake.