Reid Named to College Soccer News Team of the Week

Reid Named to College Soccer News Team of the Week

CLEMSON, S.C. — Junior forward Isaiah Reid was named to the College Soccer News Team of the Week for the week of August 22-29, the outlet announced on Tuesday. Reid scored three goals in Clemson’s first two games, including the equalizer in the Tigers’ 2-1 victory over St. John’s.

The Rock Hill, S.C. native netted two in Clemson’s 5-0 win over USC Upstate on Sunday. His goal against St. John’s came from his left foot, and he used his head and right foot to score against USC Upstate.

Reid joins goalkeeper George Marks as Tigers honored for their performances this week. Marks was named the ACC’s defensive player of the week on Tuesday for his contributions as the captain of Clemson’s defense.

Reid and Marks will be back in action at Historic Riggs Field on Friday Night when they take on South Carolina. Kickoff is slated for 7 p.m., and the rivalry match will be broadcast on ACCNX. 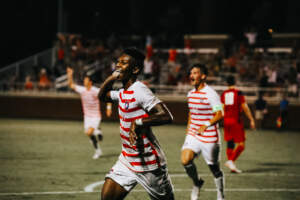