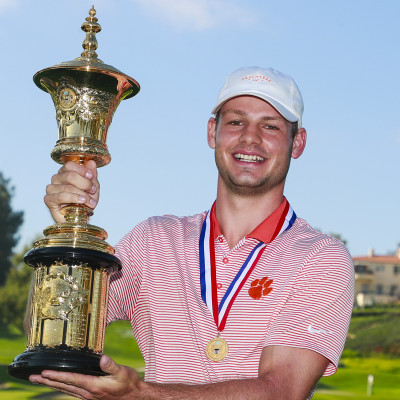 Clemson, S.C.—Clemson sophomore golfer Doc Redman will play in the Arnold Palmer Invitational this weekend at Bay Hill Country Club in Orlando, Fla. It will be the first of three PGA Tour events for Redman, who was extended an invitation after winning the United States Amateur last August.

Redman will play the Arnold Palmer this weekend, the Masters April 5-8 and The Heritage in Hilton Head, SC April 12-15. He will then return to the Clemson lineup the following weekend at the ACC Tournament.

Redman became the second Clemson golfer to win the US Amateur last August when he defeated Doug Ghim of the University of Texas in 37 holes. He also finished second at the Western Amateur last summer.

So far this year, Redman has a 71.4 stroke average for the Tigers. In his last event for Clemson back in February, he birdied each of the last two holes to give Clemson a one-shot victory over Oklahoma at the Puerto Rico Classic.

Four current professionals who played at Clemson will compete at Bay Hill this weekend. The list includes Kyle Stanley, Sam Saunders and Ben Martin, who were all members of Clemson’s 2008 team that finished fifth in the nation at the NCAA Tournament at Purdue. Lucas Glover, the only former Clemson golfer to win a Major, also will be in the field.

Redman will tee off on Thursday at the first hole at 2:08 pm and will play with Aaron Wise of the University of Oregon and professional Sam Horsfield.