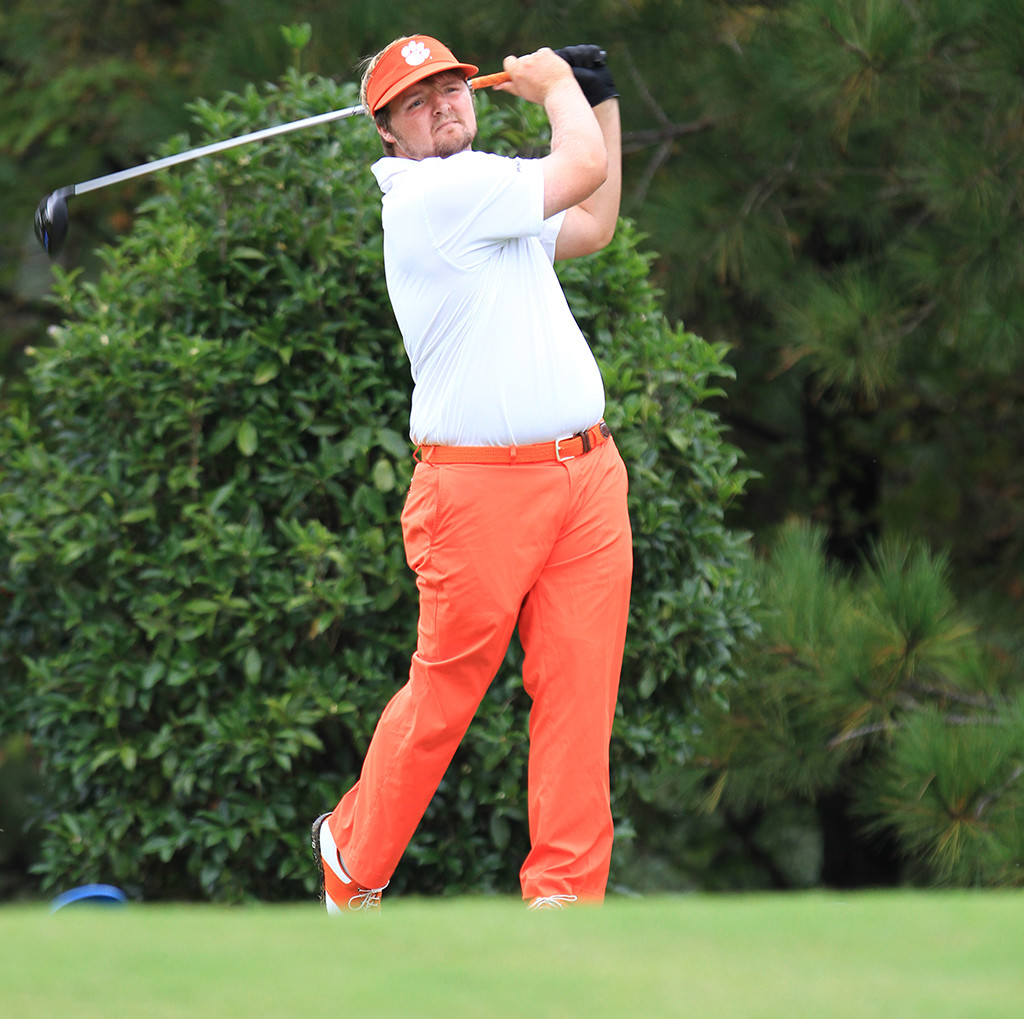 Clemson, S.C.—Junior Cody Proveaux shot a school record tying 63 to lead the Clemson golf team to a record team round of 265 in the second round of the Cleveland Golf Palmetto Intercollegiate on Monday afternoon.  All five Clemson golfers shot in the 60s for the second round, a first in Clemson men’s golf history.

The Tigers are in second place as a team after 36 holes with a 547 team score, one shot behind South Carolina heading into the final round of the 18-team tournament that is being played at Palmetto Country Club in Aiken, S.C.   Clemson trailed the Gamecocks by 12 shots entering the second round, but made up all but one stroke in the second round.  Clemson’s 265 score was the best in the 18 team field for the second round by 11 shots.

Proveaux tied the school record 63 that was shot by Brad Clark on April 20, 1985 at the ACC Tournament in Bryan Park Country Club in Greensboro, N.C. It was the second 18 of the day for Proveaux, who had a 71 in the opening round.  Proveaux moved from 32nd after the first round to a tie for third after the second round with his record setting performance.

“I feel like I made everything in that second round,” said Proveaux, who did make three putts from at least 20 feet, plus a chip in from 60 feet.  He also made a 20 footer for par.  “I played with a lot of confidence.  I didn’t drive the ball that well, but when I missed it I missed in the right place.”

Proveaux’s round included a record tying two eagles.   He made a 20-foot putt for eagle on the par five 10th, then chipped in from 60 feet on the par five 14th.  They were his fourth and fifth eagles of the year.  He had four birdies and one bogey on the front side to shoot 31, then had seven pars and the two eagles on the back.  He had a 20-foot birdie putt on the 15th hole, his next to the last hole of the day, that would have put him in position to set the Clemson record, but his putt was short by an inch.

The native of Leesville, S.C, who once played on the same Pelion High School golf team with former Clemson All-America football player Dalton Freeman, had to withdraw in the first round of his previous tournament (Puerto Rico Classic) due to a stomach muscle injury.  He finished with a pair of 77s at that event and was last in the field of 75 golfers.   But, Monday he was back to his old self.

“Cody was terrific,” said Head Coach Larry Penley.  “He has lost over 40 pounds since last year.  He never could have shot a 63 on his second round of the day had he not lost that weight.  I am very proud of him.”

Penley is proud of his entire team, as Clemson’s 265 second round total broke the previous record by three shots.  Clemson shot 268 in the second round of the 2006 ACC Tournament at the Old North State Club in North Carolina, and 268 a the third round of the 2000 Jerry Pate Intercollegiate in Birmingham.  The 15-under-par score on Monday was the third best vs. par in Clemson history.

Stephen Behr, who is playing in his first tournament of he spring after suffering a wrist injury, is in 20th place after rounds of 71-68.  Austin Langdale, the defending champion of this event, had a 77 in the first round, but came back to a 69 in the second round.  He was four-under par on the back nine.

The final round will begin at 9:30 am on the Palmetto Country Club Course in Aiken.  Live scoring is available on golfstat.com.