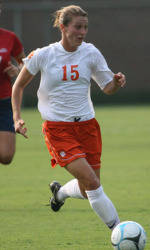 Phillips recorded 88 saves and gave up just 19 goals in over 1824 minutes in goal for a .822 save percentage and a 0.94 goals against average for the 2007 season. The senior from West Peabody, MA was a three-time All-ACC selection, earning first-team honors in 2007. She was named an All-American by the NSCAA and Soccer Buzz in 2006. Phillips finished her Clemson career with 326 saves, breaking the previous school record of 305 career saves.

Jobe, a senior defender, started all 71 games of her Lady Tiger career from 2004-07. The Roswell, GA native scored five goals and tallied two assists for 12 points in 2007. She earned second-team all-region honors from Soccer Buzz and the NSCAA in 2006 and was an All-ACC Second Team selection in 2006 and 2007.

Bolt, a junior from Charleston, SC, netted four goals and recorded five assists during the 2007 season for 13 points. The midfielder was also named to the Soccer Buzz All-Southeast Region team in 2006 and garnered second-team All-ACC honors in 2006 and 2007.

The ACC had 44 women’s soccer players representing three regions earn postseason honors from Soccer Buzz, including 28 players in the Southeast region. All Soccer Buzz awards are based on a nomination process open to all NCAA Division I coaches and balloting results of a voting panel of selected Division I head coaches and Soccer Buzz staff. All 314 schools sponsoring women’s soccer in 2007 were eligible for national and regional awards.

The Lady Tigers finished the 2007 season with a 10-6-5 overall record and a 2-3-5 mark in the Atlantic Coast Conference. Clemson defeated Charlotte 4-2 in the first round of the NCAA Tournament before falling to 15th-ranked Tennessee 1-0 in double overtime in the second round to conclude the season. The Lady Tigers were ranked 28th nationally and seventh in the Southeast Region according to Soccer Buzz’s final poll released on December 28.