Former Clemson midfielder Philip Mayaka has been called up to the Kenyan National Team for its World Cup Qualifier match vs. Mali on Thursday afternoon. A member of the All-ACC First Team in 2020, Mayaka was the third overall pick in the MLS SuperDraft to the Colorado Rapids.

While at Clemson, Mayaka was a Mac Hermann Trophy semifinalist in 2019 when he was named the ACC Freshman of the Year as well as a member of the All-American Second Team. The Kenyan national played 32 games over the course of his Clemson career, assisting on eight goals and scoring two.

Mayaka played in 10 games on Clemson’s 2020 ACC Championship team before signing as a Generation Adidas athlete in January of 2021. After being drafted by Colorado, he was sent on loan to the Rapids’s USL affiliate, the Colorado Springs Switchbacks. He made his first professional appearance on May 14, 2021.

Thus far, Kenya has drawn in both of its qualifying matches, placing it second in Group E, while its opponent, Mali, sits atop the group. The match will be played in Morocco at Le Grand Stade Agadir at 3 p.m. and will be broadcast on ESPN+. 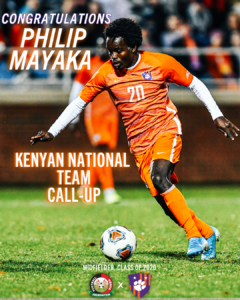