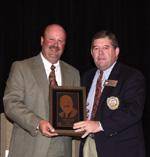 Penley To Be Honored By SC Hall Of Fame

Penley will be honored along with the Professional and Amateur athletes of the year and the Class of 2004 at the SC Athletic Hall of Fame annual awards ceremony and induction on May 20th at the Embassy Suites Hotel in Columbia. Information about the SC Athletic hall of Fame can be found at www.southcarolinaathletichalloffame.org.

To win the championship, the Tigers beat Oklahoma State on the Cowboys’ home course by two strokes. It was Clemson’s first national championship in golf and the program’s first in any sport in 16 years. In addition to the championship, Penley’s team became the first in NCAA history to win its conference, regional and national championships in the same year. The Tigers started and ended the year as the number one ranked team in the nation and Penley was named the National Coach of the year by Golfweek and the Golf Coaches Association. He also received coach of the year honors from the ACC. In January 2004 Penley was inducted into the Golf Coaches Association Hall of Fame.