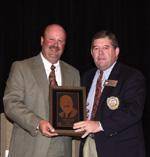 The signees for this year are Luke Hopkins of Greer, SC, Ben Martin of Greenwood, SC, David May of Auburn, NY and Phillip Mollica of Anderson, SC. “I couldn’t be happier with this large and strong class,” said Penley, who has been Clemson’s head coach since the summer of 1983. “We signed the best players in South Carolina, but also signed an out of state player in David May from New York. It is a talented group and all four will have a chance to contribute next year. They will immediately raise our level of competition within the team and thus improve our level of play in national tournaments.”

Hopkins reached the final eight of the Polo Match Play Championship at Sea Island in November. He was an all-state player in South Carolina as a junior and is already a four-time all-regional selection. He was the regional player of the year in 2003.

“Hopkins is local, but played all over the nation as a junior player,” said Penley “He must be considered one of the top players in the nation. He grew up a Clemson fan and has the all-around game and experience to be a factor for us next year.”

May is ranked seventh in the nation according to the Sagarin National Junior Rankings. He was a 2004 AJGA Second-team All-American and won two AJGA events during 2004. He was also the 2003 NYSGA New York State Junior Men’s Champion.

“David has emerged to be among the best junior players in the nation. I was most impressed with his ability to compete among the best nationally on a consistent basis. He proved that last month when he went to the finals of the Polo Match Play at Sea Island. He is a terrific ball striker and putter.”

Mollica was the recipient of the 2003 Jay Haas Award as the South Carolina Junior Golf Player of the Year. A member of the T.L. Hanna varsity since the seventh grade, he finished second at the 4A State Championship last year at Furman. He was fourth at the South Carolina State Amateur this past August.

“Phillip knows how too win tournaments. He is a lefty and we have had a lot of success with lefty players in our program. He also putts well and is a long hitter, who is still growing. He is another player who has grown up following our program since he was about 10.”

Martin has been a four-year letterman and team MVP at Greenwood High School. He was an all-region and all-state selection under Michael Hudson and finished sixth in the 4A State Championship last year. His grandfather, Tommy Cox, played baseball at Clemson in the 1940s.

“Ben Martin is a late bloomer who is capable of scoring low numbers. He had a 65 in the United States Junior qualifying that really stood out. He was taught by Billy Delk, who is the father of one of my former players (Thump Delk) and is a fundamentally sound player. Ben is a terrific student who is second in his class at Greenwood High