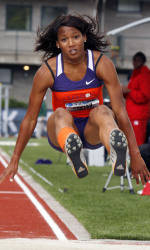 EUGENE, OR – Patricia Mamona won Clemson’s eighth NCAA event championship in women’s track & field on Thursday when she captured the triple jump crown at a soggy Hayward Field at the University of Oregon. With her victory, she earned 10 points for the Tiger women’s team and put Clemson in a tie for sixth place after two days at the national outdoor meet.

“To come out here and win a national championship is really sweet,” said Lawrence Johnson, Clemson’s Director of Track & Field. “You couldn’t write a better script for her to end her season, being the national runner-up indoors and winning the whole thing outdoors.”

The victory was convincing, as Mamona led from start to finish in the second flight. As the last jumper in the finals progression, Mamona knew she had the championship wrapped up as she approached her final attempt. All she did was go out and break the school record of 45’9″, set in 2005 by Clemson’s most recent NCAA champion Gisele Oliveira. The native of Lisbon, Portugal put together a huge leap of 45’11.75″, which sparked a huge celebration by Clemson’s 11-time All-ACC performer. She had three jumps over 45 feet on Thursday, while her competitors combined for none.

“This is one of the most historic places to have a track & field meet,” Johnson said. “We talked about the great athletes that have had the opportunity to come here and compete, and she did a great job of getting the crowd involved. She went out there and let everybody know she was here to win the championship. We talked about hitting the big mark all season, and she certainly did that today. After she knew she had the championship, I just told her `Let it rip!’ She brought it.”

Miller Moss sits third in the decathlon standings after half of the 10 events. He totaled 4,119 points on day one, 39 more than he had at the ACC Championships earlier this season when he established a school record (7,628) for the competition.

The Sumter, SC native had an outstanding start to his decathlon. He clocked a fast 10.78 in the opening event, the 100m dash. He then followed with a solid mark of 23¹4.75² in the long jump as he pumped up the Hayward Field crowd on his third and final attempt of the day. In the shot put, following a pair of subpar attempts, he dug in deep and hit a big mark of 43¹7.75² on his final toss. Moss was even more clutch in the high jump, where he cleared 6’4″ on his third and final attempt to move on to the next height. He wound up clearing 6’5″ and finishing the day with a time of 47.96 in the 400m dash. His quarter mile was second-best among the 23 competitors.

“I told Miller last night he didn’t have to come out and do extraordinary things, he just had to do things a little bit better than everybody else,” Johnson said. “If he could just do the things he did to get here and be solid and efficient, then he was going to have a great first day. And I think day two is going to be just as good if he manages the meet well and takes it one event at a time.”

Stormy Kendrick and Kristine Scott both competed for the second straight day individually, this time in the 200m semifinals. Unfortunately, neither advanced to the final with Kendrick running the top time at 23.85. Both will have a chance to compete Saturday with the 4x100m relay in the final.

Spencer Adams and Charlton Rolle competed in the semifinals of the 110m high hurdles. Rolle posted a wind-aided time of 13.82 and placed 14th, while Adams (13.95) came across 16th in his first trip to the NCAA Outdoor Championships. Michaylin Golladay took part in the women’s semifinal, clocking a time of 13.25 and finishing in 13th place overall. She will join Kendrick and Scott in Saturday’s relay final as well.

Xavier Tromp cleared his opening bar in the pole vault, but his 16’10.75″ mark was all he would be credited for in a competition that was still ongoing as of 11 PM Eastern time. He missed in three tries at the next height, 17’4.5″. Tromp finished his career as ACC runner-up in the event in April with a school record clearance of over 18 feet.

April Sinkler was also in on the action in the women’s triple jump. She hit a mark of 41’9.75″ on her first attempt, and that would prove to be her best effort of the night. She placed 15th and will go after an NCAA title on Saturday in the long jump at 12:30 PM.

The action continues with day three from Eugene on Friday. Moss will continue the decathlon with the running of the 110m hurdles at 1:00 PM. Zach Berg, the first hammer thrower from Clemson to earn an NCAA berth, is also scheduled to compete for the Tigers (7 PM).