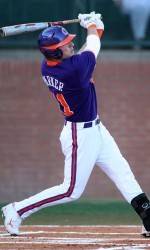 Junior outfielder Kyle Parker was named a first-team All-American by Ping!Baseball on Wednesday, becoming Clemson’s first All-American on the diamond since 2006. Parker, who was a freshman All-American on the gridiron earlier in the 2009-10 academic year when he led the Tigers to a 9-5 record and an ACC Atlantic Division title, is hitting .356 with 20 homers, 15 doubles, 63 RBIs, 78 runs, a .694 slugging percentage, 50 walks, seven hit-by-pitches, a .484 on-base percentage, and four steals in 60 games in 2010. He has also totaled 46 career home runs, eighth-most in school history.

At #14 Auburn in the Auburn Regional Championship game on June 7, he clobbered his 20th home run of the season to become the first Division I athlete in history to accumulate 20 passing touchdowns and 20 home runs in the same academic year. That same day, he was drafted in the first round (#26 overall pick) of the Major League draft by the Colorado Rockies.