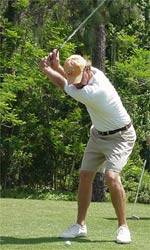 NORMAN, Okla. – The Golf Channel will televise a highlight show covering the 2001 Palmer Cup presented by CSFBdirect begining tonight at 8 p.m. ET. The show will re-air at 11 p.m. tonight and again on September 15 at 9 a.m.

The show will provide an up-close look at the golfers and coaches in the matches. One-on-one interviews were done with each of the participants, and live microphones were worn by several of the players during the competition.

The eight collegians representing the United States defeated their counterparts from Great Britain and Ireland in the event, which took place at Baltusrol Golf Club in Springfield, N.J. June 27-28.

Five members of the U.S. Walker Cup team also repesented America in the 2001 Palmer Cup, while two GB&I golfers played in both events.