Our Story: A Special Bond

“Neither snow nor rain nor heat nor gloom of night” usually refers to mail delivery, but Paula and Franklin Grooms live these words through their devotion and loyalty to the Clemson men’s basketball team.

“It’s her way of showing our players that they mean a lot to her and that this is Clemson. The Clemson family is real,” said coach Brownell.

Paula and Franklin wish the team well each team it departs for a road trip and welcome the team home again, no matter the weather or the hour.

This tradition is certainly special for the couple, but it also means a great deal to the players and families of Clemson basketball.

It all started about 12 years ago with Paula and Franklin’s grandson, whose initials became his nickname, Jag. When Jag was in nursery school, his grandparents took him on many field trips. One of those was to the Anderson Airport to watch the planes.

“After we were done, the [airport] manager there asked if we would like to see the men’s basketball team take off,” Paula recalls.

“He asked us if we were Clemson fans and we responded, ‘yes, we are,’” Paula says with a smile. “I even had some pom-poms in the car.” Franklin chuckles as Paula continues, “We stood there at the fence and waved our little shakers.”

The couple asked when the basketball team would return, and they made sure to come back when the team landed safely. 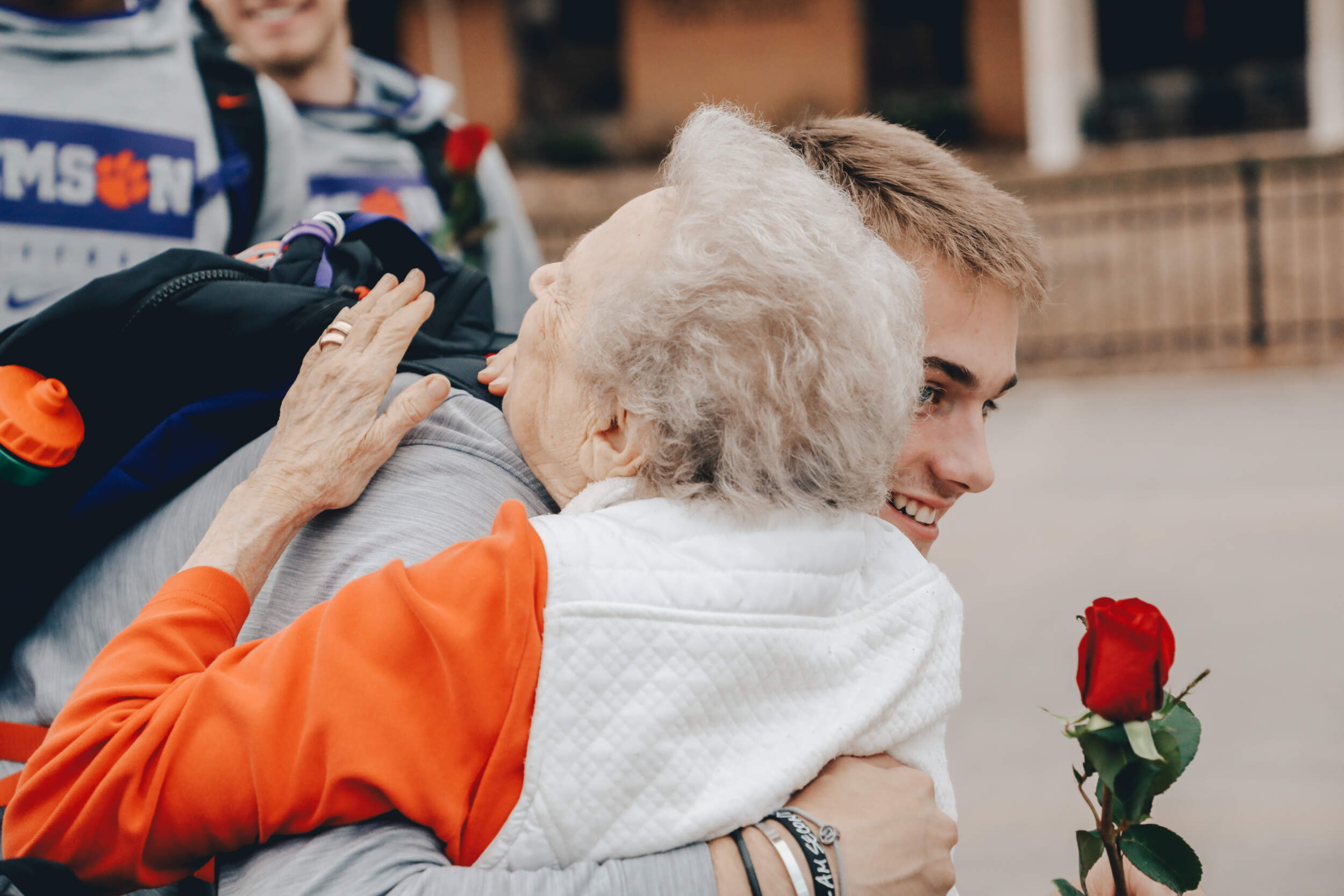 “The pilot called us from Virginia Tech,” remembers Franklin. “He told us what time they would be landing in that airport.”

“They call us the airport junkies,” laughs Paula as she and Franklin share a smile.

“There was no one there to wish them good luck, tell them to have a safe trip, thank them for what they do, tell them everything will be alright if they lost or we’ll be proud of you if you win. I just felt that they were children that needed some love and we just fell in love with them.”

Sometimes the team has to fly in and out of the Greenville-Spartanburg Airport, where access to the tarmac is restricted. In that case, Paula and Franklin wait for the team at Littlejohn Coliseum to greet the team when they get home. 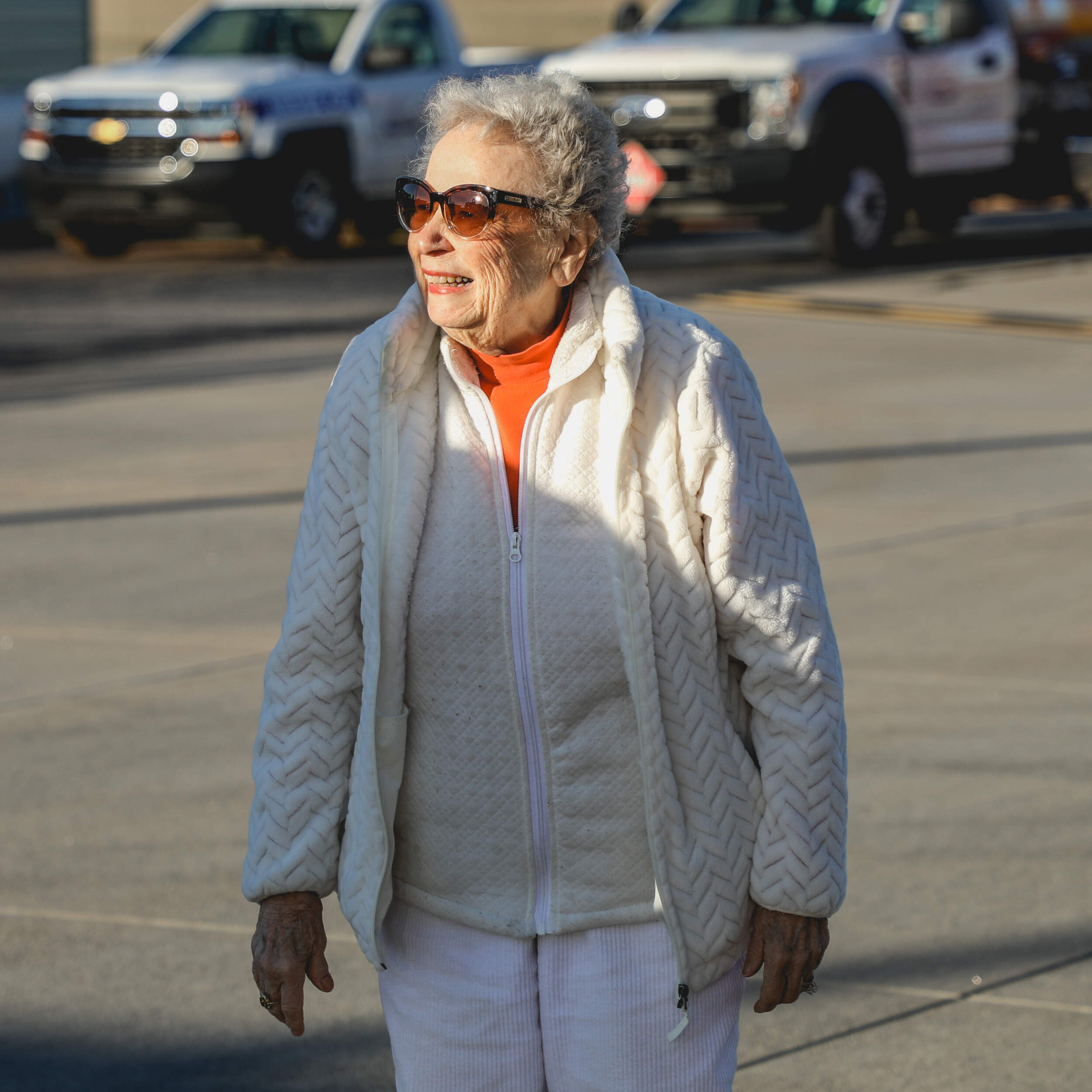 “I told Brad [Brownell] that he got stuck with us. He wasn’t here when we started this, he kind of just inherited us”

“Paula and Franklin Grooms don’t care about outcomes; they care about people. She did this out of the goodness of her heart one time 11 or 12 years ago and has been doing it ever since,” said Brownell.

Her hugs have become something that everyone in the program looks forward to when they depart for a trip or arrive back home. That relationship that Paula and Franklin have forged with Clemson players and staff over the years is one of loving grandparents.

“We call ourselves their adopted grandparents,” said Paula. “They are like our little grandchildren; we really care and [we] love them.”

“Our daughter said that when they left home, we adopted the basketball team over at Clemson,” Franklin says chuckling. Paula adds, “She said it was the worst case of empty nest syndrome she has ever seen.”

While all the players look forward to their sendoff and greetings, star junior forward Aamir Simms has developed a special relationship with Paula and Franklin.

Aamir recalls meeting them for the first time. “My first thought was ‘Wow, I really have someone that cares about me and they don’t even know me,’ This is kind of like my grandma being away from home. Every time I see her, she greets me with hugs and warm kisses on the cheek. It’s like something you see in the movies where you are like ‘grandma, stop,’” Simms says, laughing.

Simms recognizes how special it is to have someone like Paula during the course of the season with its highs and lows.

“Every time I see her, I know she’s proud of me. Whether I score a lot or I don’t, or whether I play bad or I don’t. That’s something that has grown over the past three years. Every time I get off the bus, I have a smile from ear to ear, and she does, too. We just have this connection that I don’t think most people have with her.”

“On the low, we are definitely each other’s favorites,” says Simms with a big smile. 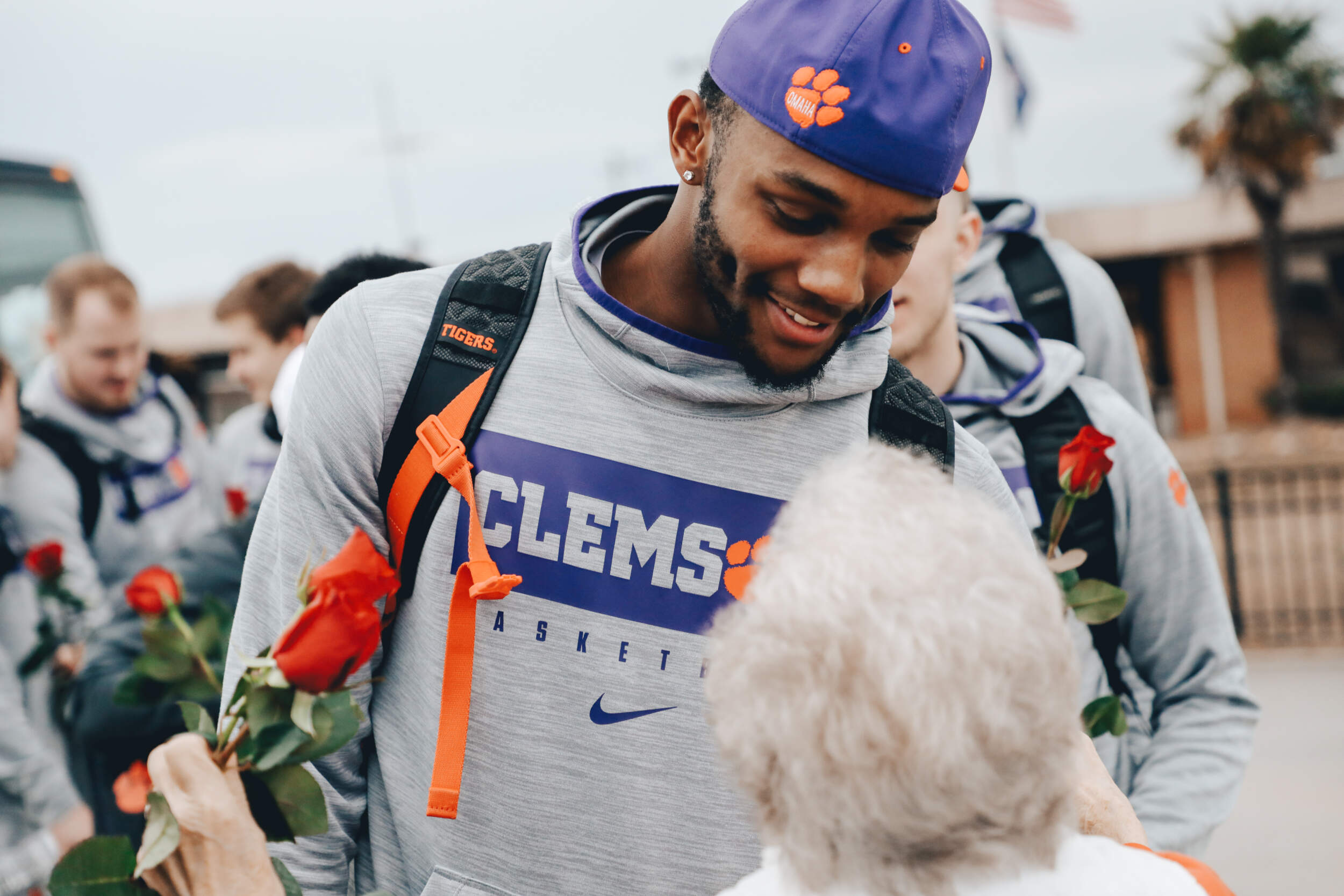 Family is something that was extremely important to Aamir during his recruiting process, and he’s seen the Clemson Family in action, but nothing compares to Paula and Franklin.

“Having people like them there all the time, whether it’s two in the morning, eight in the morning or three in the afternoon, they really are family. Family isn’t tied by just blood; it’s tied by loyalty. Their loyalty to our program is outstanding and it’s something that I will always remember.”

“Their loyalty shows that they don’t care about what is necessarily on the front or back of our jerseys, but they care about us as people.”

When asked to recall his favorite memory, Aamir settles on one from last summer.

“When we got back from Italy, I knew Mrs. Grooms was following our whole trip on Twitter and knew everything that happened. When we got back, there is a picture of me putting my gold medal around her neck and the smile on her face is something that I will never forget. She was speechless. I wanted to let her know that because we won gold, so did she.”

“Paula and Franklin Grooms and their family are incredible people,” says Brownell. “We treat her like one of our own. She’s an incredibly special lady.”

Paula and Franklin, smiling ear to ear as they recall stories and relive memories, reflect on what it all means.

“We’re just real thankful that people with basketball have included us,” says Paula. “We just feel so honored and blessed. It’s just a close family bond; they are all family.”

The idea of Clemson Family extended beyond just Paula and Franklin last spring at the annual men’s basketball banquet. Longtime Clemson donors, Bill and Lynne Burton, who donated money to name the Burton Gallery, where the banquets and many other events are held, had a special surprise for the couple.

The Burton’s surprised Paula and Franklin by dedicating the naming of the Clemson basketball team lounge and marking it in their names. The plaque reads as follows:

“Named in honor of Paula and Franklin Grooms for their unwavering support of Clemson Basketball and the players whose lives are forever enriched by their love.A gift from Bill (’77) and Lynne Burton”

“We first witnessed the special bond between the Grooms and Tiger Basketball some years ago at the airport as the team was boarding for a road game. We didn’t know who the Grooms were then, but it was obvious from the genuine affection in every smile and every hug doled out to every player, coach and staffer that they were very special people,” recalls Lynne and Bill. “Ever since we’ve been enchanted by this incredible love story. We wanted to honor the Grooms, and the team lounge – a space apart from the x’s and o’s of the game where players hang out and bond as family – was a perfect fit. Paula Grooms and her husband Franklin epitomize Clemson family in all that they do, and they mean the world to the players and the program.”

“We were absolutely shocked and honored at our last basketball banquet at the end of last season,” recalls Paula. “We had no idea. They came up to dedicate something and we are all sitting there listening. He said they are going to dedicate the lounge to Franklin and Paula Grooms.”

“I just sat there and thought, ‘what did they just say?” Paula says laughing with Franklin sharing smile. “Aamir Simms just jumped up and started clapping and my son Brandon and his son Jag who were with us, he said ‘Momma, that is you, you’ve got to get up,” Paula says bursting in laughter. “It couldn’t even register. We were just so thrilled and so blessed. We didn’t expect anyone to even notice us. That was a huge thrill.” 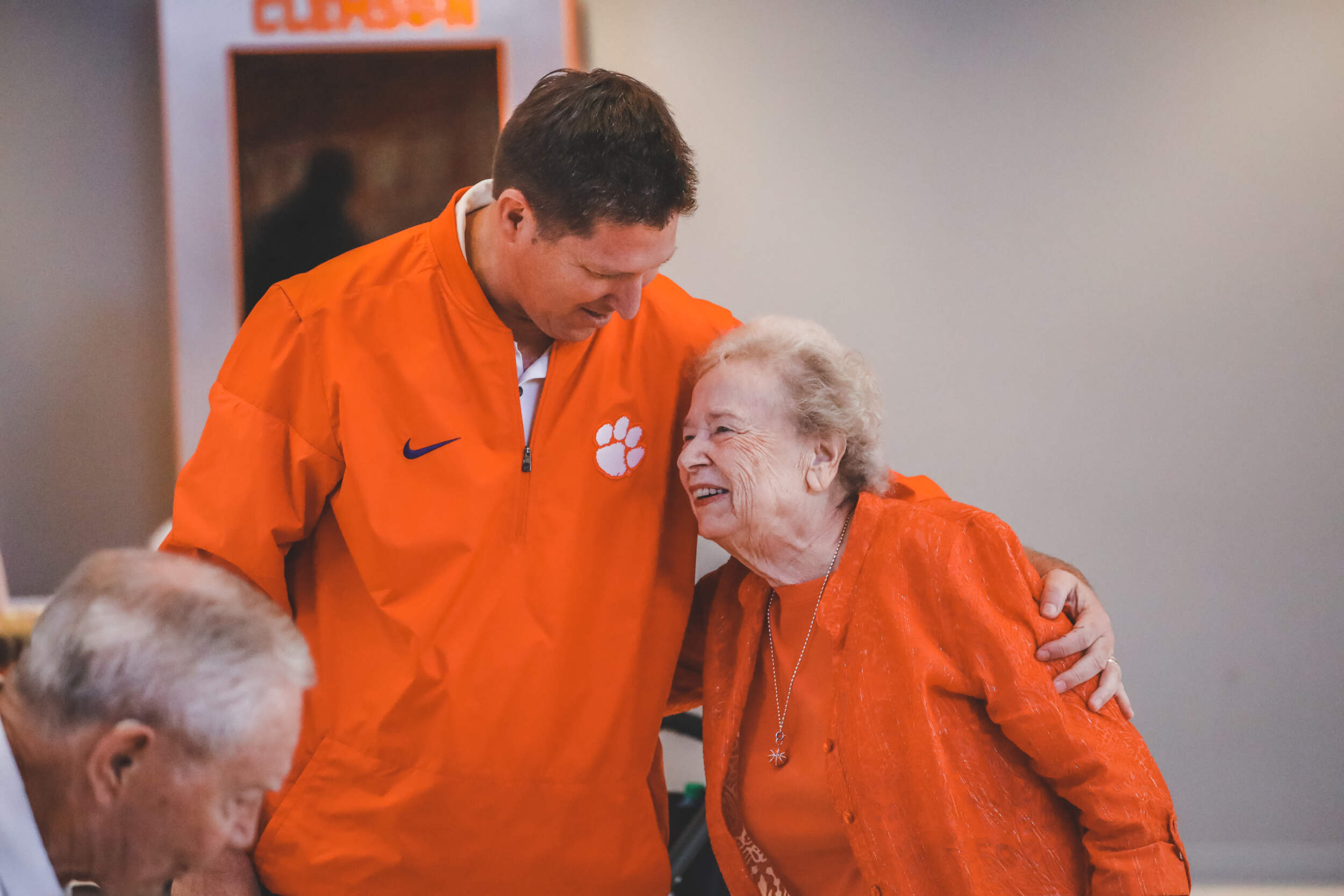