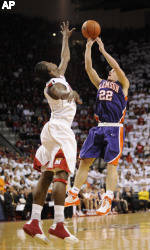 COLLEGE PARK, Md. (AP) — Terrence Oglesby nailed the tie-breaking three-pointer with 2.3 seconds remaining in the game and Clemson erased a 20-point second-half deficit in a 73-70 victory over Maryland on Sunday night.

With Landon Milbourne sagging off him on the right wing, Oglesby had clear path for the decisive basket to give the Tigers (21-7, 9-5 Atlantic Coast Conference) their fourth victory in five games.

Mays scored 16 of his 20 points in the second half and grabbed nine rebounds for Clemson, which had lost two straight to Maryland. Trevor Booker added 18 points and Oglesby had 12.

After a pair of Hayes free throws gave Maryland a 68-55 lead, Mays tallied the final seven points of a 9-0 run. Mays converted a 3-point play with 3:00 left and capped the run with a slam after Oglesby had stolen the ball from Gist on the ensuing inbound play to make it 68-64.

Gist had 11 points in the opening 20 minutes and Maryland scored 13 unanswered points after Booker’s two-handed slam with 11:03 left in the half. The Tigers failed to score for almost six minutes, turning the ball over six times in that span.

Clemson started 8-for-21 from the floor, committed 14 first-half turnovers and squandered an early 18-15 lead. The Terrapins closed the half on a 22-7 run for a 37-25 halftime lead.