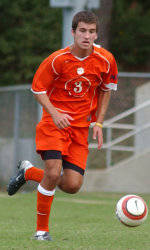 CHICAGO, IL – U.S. Men’s Olympic Team head coach Peter Nowak has named the 18 players who will represent the United States at the 2008 Olympic Games in Beijing. The roster features 12 players who have experience at the full national team level, including the three youngest players on the team, Freddy Adu, Jozy Altidore and Michael Bradley, and the most senior member of the team in Brian McBride. The official roster is due to FIFA no later than July 23.

Included in this group are two former Clemson players, Nathan Sturgis and Stuart Holden. Sturgis played at Clemson in 2004 and 2005 and was named All-American by Soccer America, the NSCAA (Third-Team), and College Soccer News (Second) in 2005. He was named first-team All-ACC and All-South in 2005. Sturgis was named the ACC’s Defensive Player-of-the-Year in 2005.

The U.S. will begin their final preparation for the Beijing Olympics on Sunday, July 20, with six days of domestic training in San Jose, Calif. The team will then depart for Hong Kong, where they will participate in the ING Cup, facing fellow Olympic participants Ivory Coast on July 30 and Cameroon on Aug. 2.

“After an extensive process of evaluation, we are very excited about the group of players that we have chosen to represent the United States at the Olympic Games,” said Nowak. “It has been a very competitive environment, and we had some tough decisions to make. It’s no secret that we have a difficult challenge in front of us with our group, which is one of the most difficult in the tournament. We know that some players are coming in during the off-season, and some are in season so we have to make sure that everyone is on the same page during our preparations. Our senior team plays in a World Cup Qualifier in August, and we wanted to make sure that we have two competitive teams for both the Olympic Games and the World Cup qualifiers.”

A total of 11 players were part of the USA squad that booked the team’s ticket to Beijing in March by finishing in second place in the CONCACAF Olympic Qualifying Tournament. Adu, Maurice Edu and Michael Orozco were named to the Best XI in that event, while Sacha Kljestan received Honorable Mention.

Eight different leagues from around the world are represented on the U.S. roster, including Major League Soccer, which sends 10 players from six different teams. No more than two players have come from any one team, as the Houston Dynamo, Real Salt Lake and Toronto FC each send a pair to Beijing.

Nowak has enlisted three-time World Cup veteran McBride as one of three overage players, along with goalkeeper Brad Guzan and defender Michael Parkhurst. McBride brings a wealth of experience to the young squad having earned 95 caps during 10 years with Men’s National Team. McBride ended his National Team career with 30 goals, and is the only U.S. player to score a goal in multiple World Cups. The next-highest cap-winner is Bradley, who has earned 20 caps with the full side and will turn 21 on July 31. Bradley is coming off a banner year for SC Heerenveen, his 20 goals in all competitions the most for a U.S. player in a major European league in a single season.

“There’s definitely a lot of experience in our group, and a lot of guys who have been able to get good experience with the full National Team,” said Bradley. “Those experiences will be able to help us as a team as we move forward. At this point we’re looking forward to getting together this weekend to start the process of getting ourselves ready for the tournament.”

Bradley leads a talented group of midfielders into the tournament, alongside Benny Feilhaber, who has earned 16 caps for the full team and has recently recovered from knee surgery following an injury suffered against Turkey on May 21 in Toulon, France. Adu, who scored four times in three games to lead all goalscorers in the CONCACAF qualifying tournament in March, has played in four FIFA youth World Cups, and was the first player to ever score a hat trick in both the FIFA Under-17 and Under-20 World Cups. Kljestan, who served as the team’s captain during their two-game tour of China in December 2007, was recently named in the First XI for the 2008 MLS All-Star Game, and will be joined by reigning MLS Rookie of the Year Maurice Edu and Houston Dynamo star Stuart Holden as the domestic league’s representatives in the midfield. Former U.S. Under-20 standout Danny Szetela, who has since earned two caps with the full team, rounds out the strong midfield contingent.

Guzan and Chris Seitz hope to continue the U.S. tradition of stellar goalkeepers. The 24-year-old Guzan – honored as the 2007 MLS Goalkeeper of the Year – recently earned a pair of shutouts in the second round of 2010 FIFA World Cup Qualifying as the U.S. defeated Barbados by a 9-0 aggregate margin over two matches. Seitz was one of the stars of the 2007 FIFA Under-20 World Cup, and earned two shutouts in three games during the 2008 Olympic Qualifying campaign.

McBride leads a group of forwards with the potential to form a potent attack in China. Altidore scored four goals at last year’s Under-20 World Cup, including both goals in the 2-1 win against Brazil. He recently signed with Spanish first division side Villarreal, who finished second in Spain’s La Liga last year behind Real Madrid and will participate in the 2008-09 Champions League. Charlie Davies joins the team in midseason form from Sweden, where he is among the leading scorers for a Hammarby IF side off to an 8-0-2 start in the Swedish first division. Columbus striker Robbie Rogers has recorded five goals in 16 matches for the Crew, who currently sit in second place in the Eastern Conference.

“I know a lot of guys have had the chance to play together, but there are the guys who haven’t had that chance – me being one of them,” said McBride. “So, you have to have that melding of styles and understanding. Thankfully Peter is a great coach and has been a great player, so I think he understands the ins and outs of everyone’s mental psyche. Those types of things will be a huge factor for the team in this situation.”

The defensive unit, made up of four players who were part of the team’s qualifying campaign, will be bolstered by the addition of the reigning MLS Defender of the Year in the 24-year-old Parkhurst. The Revs defender earned a medal as part of the USA’s 2007 CONCACAF Gold Cup-winning side last summer. Patrick Ianni, Orozco, Nathan Sturgis and Marvell Wynne were all part of the defensive unit that earned three shutouts in CONCACAF qualifying in March.

The U.S. has been drawn into a difficult Group B and will open against Japan on August 7 before facing the Netherlands on August 10, with both games taking place at the Olympic Sports Center Stadium in Tianjin. The team will then travel to Worker’s Stadium in Beijing to conclude group play against 1996 gold medalist and 2005 Under-20 World Cup champion Nigeria on August 13.