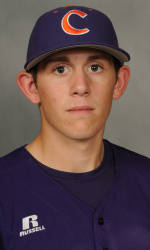 Rico Noel’s solo home run in the 11th inning lifted #14 Coastal Carolina to a 4-3 win over #10 Clemson in front of 5,609 fans at Doug Kingsmore Stadium on Wednesday night. The Chanticleers’ victory snapped Clemson’s seven-game winning streak in the series and was their first win at Clemson since 2003. Coastal Carolina improved to 20-5 on the season, while Clemson fell to 18-7.

Clemson took a 3-0 lead in the fourth inning on Jeff Schaus’ run-scoring triple and Kyle Parker’s two-run homer. But the Tigers were held hitless and scoreless during the last seven innings despite drawing nine walks and one hit-by-pitch over that span. Coastal Carolina scored single runs in the fifth, seventh, and eighth innings before Noel’s game-winning long ball with two outs in the 11th inning.

The four Chanticleer relievers (Keith Hessler, Matt Laney, Ryan Connolly, Austin Fleet) combined to allow no hits, no runs, nine walks, and one hit-by-pitch with six strikeouts in the final 7.0 innings pitched. Fleet (3-1) earned the win by tossing 4.1 innings, allowing no hits, no runs, and four walks with one strikeout.

David Haselden (2-2) suffered the loss despite allowing just one hit and one run with four strikeouts in 3.0 innings pitched. Freshman Dominic Leone made his first career start for the Tigers. In a career-high 5.1 innings pitched, Leone yielded just four hits, one unearned run, and one walk with one strikeout.

The Tigers took the game’s first lead in the fourth inning. Mike Freeman led off with a single up the middle and scored on Schaus’ triple to right-center. Parker hit the next pitch over the fence in right-center for a two-run homer, his 11th long ball of the season.

The Chanticleers came right back and scored a run in the fifth inning thanks to a Tiger error. Taylor Motter hit a one-out infield single, then Steve Davis hit a potential inning-ending, double-play grounder. But shortstop Brad Miller’s throw to second was errant, allowing the runners to advance to second and third. Noel followed with a sacrifice fly to left-center to score Motter.

In the seventh inning, Davis laced a two-out single through the left side and went to third on Noel’s single up the middle. Davis then scored on a passed ball.

After the Tigers left the bases loaded without scoring in both the sixth and seventh innings, Tommy LaStella led off the eighth inning with a solo homer to right field, his third long ball of the season, to tie the score 3-3.

In the top of the ninth inning, Motter, the leadoff batter of the frame, stayed alive when first-baseman Will Lamb dropped a pop-up in foul territory and later drew a walk. Davis’ sacrifice bunt advanced Motter to second, then Motter moved to third on a wild pitch on an 0-2 count. Noel later was hit-by-pitch on a 3-2 count and Scott Woodward walked on four pitches to load the bases. Jose Iglesias followed with a strikeout looking for out #2, then LaStella struck out swinging on a 3-2 pitch up and out of the strikezone for the inning-ending out.

Pinch-hitter Chris Epps led off the bottom of the ninth inning with a walk on six pitches but was retired at second base when Lamb reached on a bunt back to the pitcher. Lamb moved to second when Freeman walked, but Schaus grounded into a 4-6-3 inning-ending double play to send the game into extra innings.

In the top of the 11th inning, Noel hit a two-out, solo homer to left field, his fourth home run of the season, to give Coastal Carolina a 4-3 lead.

John Hinson led off the bottom of the 11th inning with a walk on four pitches and advanced to second on John Nester’s sacrifice bunt. But Epps flied out and Lamb grounded out to the pitcher to end the game.

Noel went 2-for-4 with a homer and two RBIs to lead Coastal Carolina, who had 10 hits. Five different Tigers had one hit apiece for Clemson, who only scored three of its 15 baserunners in the game, while both teams left 10 runners on base. Clemson also committed four errors, while Coastal Carolina was errorless.