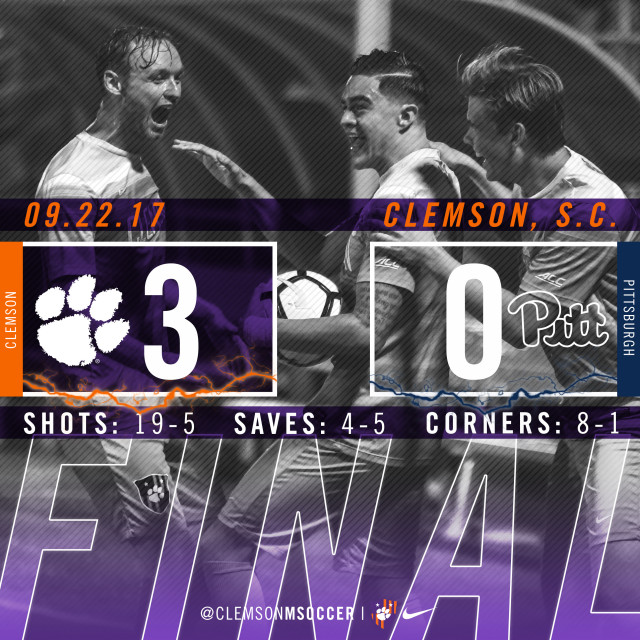 No. 8 Clemson Shuts Out Pittsburgh 3-0

CLEMSON, S.C. – Powered by both Oliver Shannon and Robbie Robinson’s first goals of the season, the No. 8 Clemson men’s soccer team defeated ACC foe Pittsburgh 3-0 on Friday night at Historic Riggs Field. With the victory, Clemson improved to 7-1-0 on the year and 2-1-0 in the ACC, while Pitt dropped to 3-5-0 overall and 0-3-0 in conference play.

The Tigers struck first in the 32nd minute on Diego Campos’ fourth goal of the season, a shot from inside 18 yards that the senior laced into the upper left corner of the net. He was assisted by Robinson, and it was the first assist of the freshman’s Clemson career.

Shannon doubled Clemson’s lead in the 58th minute when he scored his first goal of the year on a straight-on shot from five yards out, assisted by Campos and Alexander Hemmingsen, also the first assist of his career as a Tiger. Robinson continued the Clemson offensive attack in the 79th minute, heading in his first career goal as a Tiger off a pass from Michael Melvin.

Clemson wraps up this four-match homestand with a meeting against Charlotte on Tuesday at 7 p.m. at Historic Riggs Field.