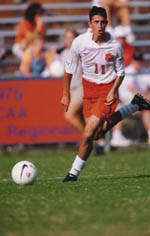 No. 8 Clemson Men’s Soccer To Face No. 11 Furman Wednesday

CLEMSON, S.C. — With top-10 rankings at stake, eighth-ranked Clemson and 11th-ranked Furman will meet for the 34th time in men’s soccer on Wednesday, October 25 at 7:00 pm at Clemson’s Historic Riggs Field. Clemson holds a 28-4-1 series advantage against the Paladins.

Clemson enters the game 10-3-1 and is coming off back to back road victories over Davidson and 15th-ranked Wake Forest. The Tigers are led by sophomore Fabio Tambosi whose 13 goals and 30 points are both team highs. Tambosi is ranked 19th in the nation in points per game and 14th nationally in goals per game. Senior Mark Lisi leads the Tigers with assists assists and is ranked 10th in the nation in assists per game.

Furman comes to Clemson with a 13-2-1 record and also having won two straight games. Furman and Clemson rank fourth and fifth respectively in the nation in scoring offense and Furman is ranked eighth nationally in goals allowed per game.