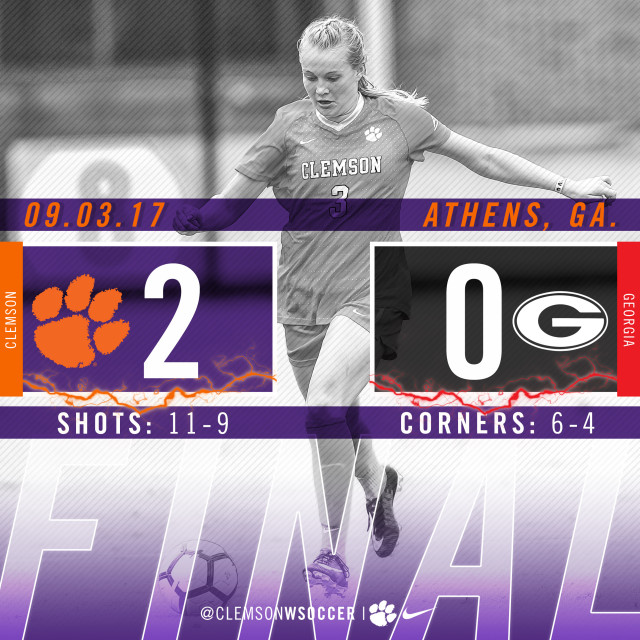 ATHENS, Ga. – The Clemson women’s soccer team continued its perfect start to the 2017 season, defeating Georgia 2-0 on Sunday night at Turner Soccer Complex in Athens, Ga. With the win, the eighth-ranked Tigers improved to 6-0 overall, while the Bulldogs slipped to 3-3.

“We got a win on the road against a good, hard-working Georgia team tonight,” said Head Coach Eddie Radwanski. “I thought we played some of our best soccer thus far. We had a lot of solid performances and great ball movement that created some great chances. The crowd and the atmosphere in Athens tonight were amazing, and made it a great night for soccer. Tomorrow, we’ll be back to work preparing for our next match, on Friday vs. South Carolina.”

Clemson and Georgia went into halftime tied 0-0, after both teams took four shots in the first half. After 52 minutes of play, Sarah Osborne found the foot of Mackenzie Smith who took a shot from 25 yards. The ball traveled past several defenders before finding the back of the net, giving the Tigers the 1-0 lead. The goal was not only the first of the season for Smith, but also the first of her career for the sophomore defender.

In the 58th minute, Mariana Speckmaier handled a corner kick, sending it into the box and connecting with head of Jeni Erickson, who redirected the ball into the back of the net. The goal was Erickson’s third of the season.

For the match, Clemson outshot Georgia 11-9, and 5-3 in shots on goal. The Tigers earned six corner kicks, while the Bulldogs had four. Sophomore Sandy MacIver earned another shutout, her third in a row, and picked up her fourth straight win in net for the Tigers.