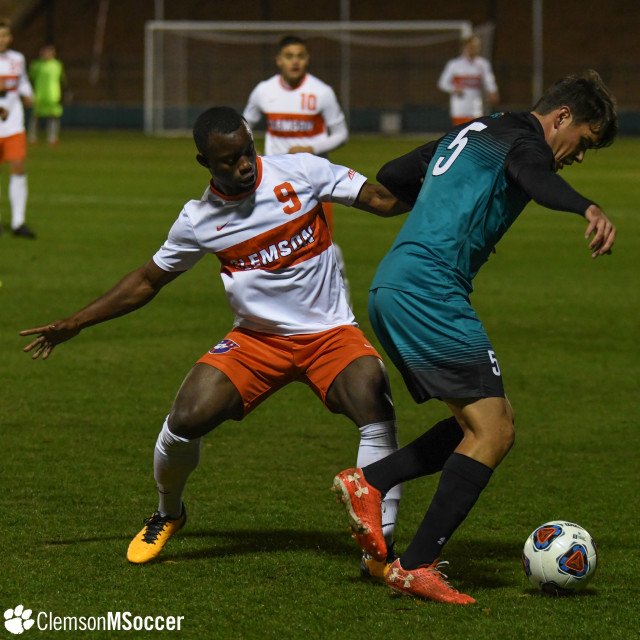 No. 8 Clemson Falls to Coastal Carolina in NCAA Second Round

CLEMSON, S.C. – The No. 8 Clemson men’s soccer team fell in the second round of the NCAA Tournament on Sunday night, as the Coastal Carolina Chanticleers emerged with a 3-1 victory at Historic Riggs Field. With the loss, Clemson finished the season 12-6-1, while Coastal Carolina moves to 14-6-1.

The Chanticleers scored two goals in the first five minutes, one each from Martin Melchor and Frantzdy Pierrot, to take an early 2-0 lead. Clemson cut the Chanticleers’ lead in half in the 20th minute after Diego Campos found Jason Wright in the middle, and Wright capitalized from six yards out for his eighth goal of the season. The Tigers’ best look before the break came in the form of a Saul Chinchilla header with eight minutes remaining in the first half, and Coastal Carolina took a 2-1 lead into halftime.

Melchor scored his second goal of the game in the 50th minute to give the Chanticleers a two-goal lead. In the 62nd minute, Coastal Carolina’s Yazeed Matthews earned a red card, forcing the Chanticleers to play the remainder of the match with 10 men. The Tigers controlled the ball for most of the rest of the match and had a handful of scoring opportunities, the best on a Tanner Dieterich header from short range with two minutes left, but the Chanticleers proved too much to overcome.

“First of all, credit to Coastal Carolina, because they came out and played extremely well,” head coach Mike Noonan said. “They capitalized on some defensive errors at the beginning of the game. We were on the back foot, and sometimes that happens when you’ve had the bye, and you haven’t faced elimination yet. I thought that the team did well to get a footing in the game and come back into it and get the goal…and their goalkeeper played extremely well, and we couldn’t find the equalizer. Once they scored the third one, it was too much of a mountain to climb.

“It goes without saying how proud we are. They’ve represented Clemson, themselves and their families exceptionally well. The senior class leaves with an ACC Championship, a National Final performance, and four seeds in the NCAA Tournament. Obviously, we’re very, very proud of them, and ultimately, the disappointment comes because it’s about winning trophies here at Clemson. Unfortunately, tonight, we fell short, but we’ll get over this one and progress to next season.”