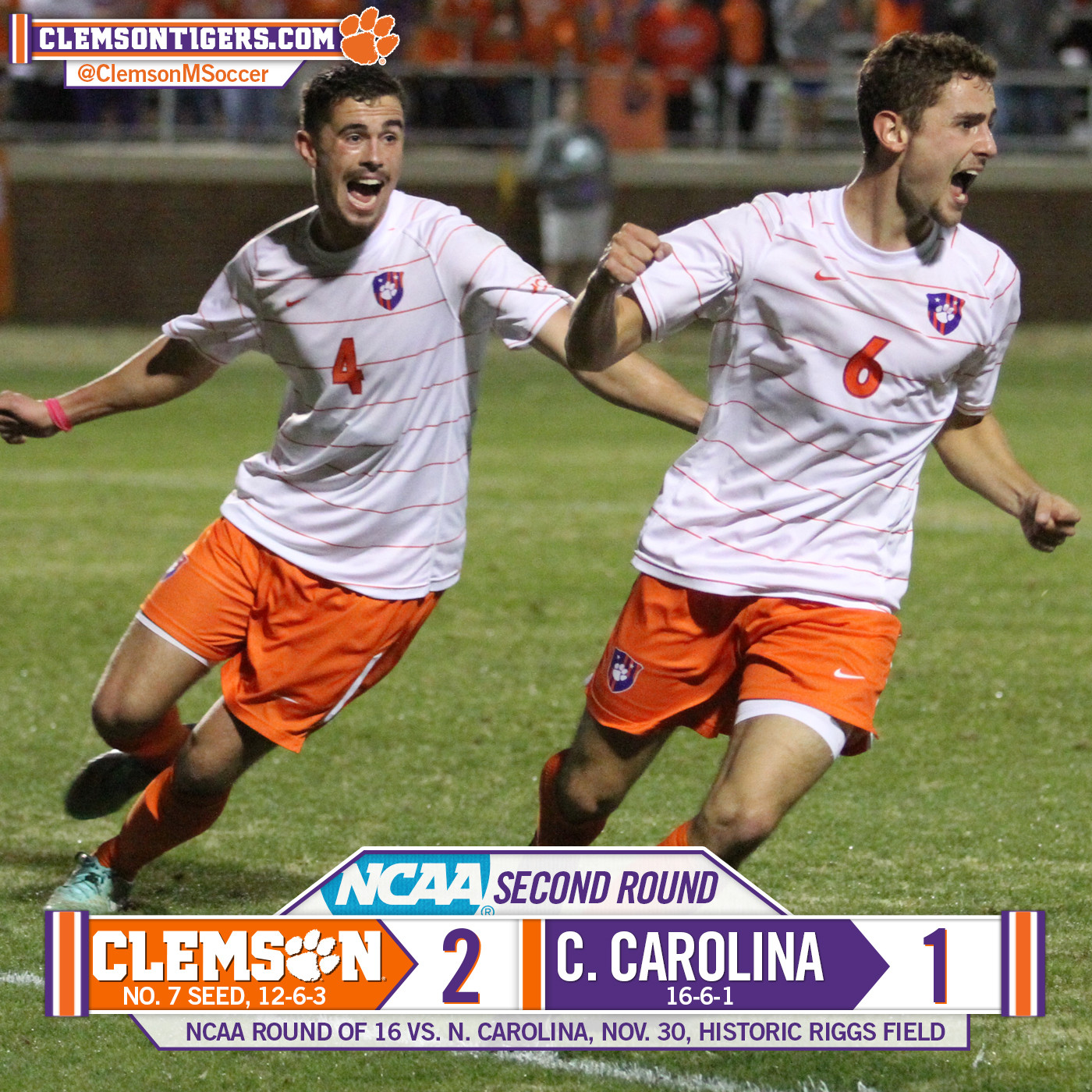 CLEMSON, S.C. – The seventh-seeded Clemson men’s soccer team edged No. 25 Coastal Carolina 2-1 Monday night in the second round of the NCAA Tournament at Historic Riggs Field. The Tigers advance to the Round of 16 for the first time since 2006 and for the 23rd time in program history. Tonight’s win was the first NCAA Tournament win for Clemson since 2006. Clemson faces North Carolina at Historic Riggs Field on Sunday, Nov. 30. Clemson improved to 12-6-3 on the season with the win.

After more than 44 minutes of scoreless soccer, the Tigers scored with just 40 seconds left in the first half to take a 1-0 lead into halftime. Coastal Carolina was whistled for a foul and freshman Diego Campos handled the free kick from 20 yards. Campos’ shot was saved by the Chanticleer keeper Devin Cook-Perales, however, junior Paul Clowes got the rebound and put it into the upper left corner of the net. The goal was Clowes’ second of the season. His first was scored last Sunday in the Tigers’ ACC Championship game win over Louisville.

It took just 12 minutes into the second half for Clemson to put its second goal on the board. Sophomore Alex Happi sent a pass forward along the right side to senior Manolo Sanchez. Sanchez crossed it in front of the goal from the right, and Campos put it in the net from close range for his third goal of the year, giving the Tigers a 2-0 lead.

Coastal Carolina made it 2-1 less than five minutes later on a header by Tom Gudmundsson following a long free kick by the Chanticleers’ Elis Bjornsson. The header was high, and dropped in the top of the net just out of the reach of sophomore keeper Andrew Tarbell.

The Chanticleers continued to threaten the remainder of the second half, but Tarbell’s four saves in the half and the backline defense of senior captain Phanuel Kavita and junior Kyle Fisher held the Chanticleers in check. Coastal Carolina attempted nine shots in the period.

As a team, Coastal Carolina had the advantage in shots 15-8 and in corner kick opportunities 4-3 in the match. The two teams were called for a total of 41 fouls and seven cards in the match, a testament to the game’s physical play.

Clemson returns to the pitch at Historic Riggs Field on Sunday against North Carolina. Details regarding a start time and ticket information will be announced on ClemsonTigers.com and @ClemsonMSoccer on Twitter when they are available.