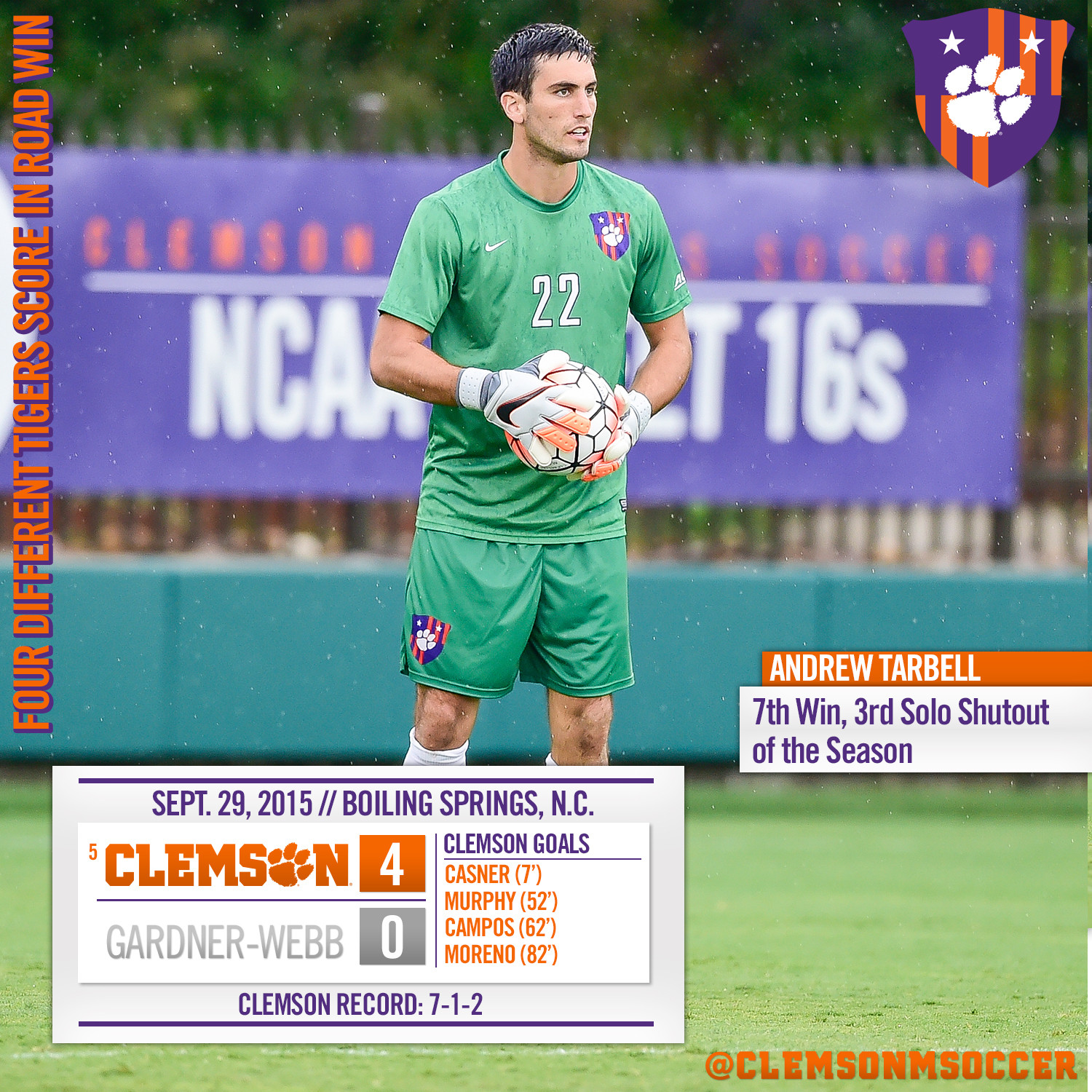 No. 5 Tigers Blank Gardner-Webb on the Road Tuesday

BOILING SPRINGS, N.C. – The fifth-ranked Clemson men’s soccer team blanked Gardner-Webb on the road in Boiling Springs, N.C. on Tuesday evening by a score of 4-0. Four different Tigers scored in the win, which improved the team’s record to 7-1-2, while the Runnin’ Bulldogs fell to 1-8.

“The guys handled themselves well when faced with tough conditions tonight – playing on the road on a narrow, water-logged field,” said Head Coach Mike Noonan. “I’m happy that we got a clean sheet and scored four good goals by four different players. That shows that the team played reasonably well.”

T.J. Casner opened the scoring in the seventh minute of play, extending his scoring streak to five consecutive matches. The senior forward now has six goals on the season, and leads the team in both goals and points. The Tigers did not score again in the first half, but came out quickly in the second half.

Redshirt senior Kyle Murphy netted his third goal of the year in the 52nd minute on a close-range goal that was assisted by sophomore Saul Chinchilla. Ten minutes later, sophomore Diego Campos scored his second of the season, with an assist by sophomore Oliver Shannon. Thales Moreno capped off the scoring in the 82nd minute with a curling shot from 30 yards. It was the first goal of the year for the junior midfielder, and he was assisted by junior Alex Happi on the play.

Junior keeper Andrew Tarbell kept the Runnin’ Bulldogs off the board, tallying three saves and recording his seventh win and third solo shutout of the season. Clemson dominated the game statistically, taking 32 shots and 10 corner kicks to Gardner-Webb’s four and one.

“Now we have to turn around and get focused on Virginia Tech on Friday. We’re all looking forwarding to celebrating the 100th anniversary of Historic Riggs Field as well.”

The Tigers return to Historic Riggs Field on Friday, Oct. 2 to host Virginia Tech. The match is scheduled for 5 p.m., and will be followed by a women’s match at 7:30 p.m. Both matches are part of the celebration of the 100th Anniversary of Riggs. For more information about the anniversary celebration, visit this page: http://bit.ly/Riggs100.