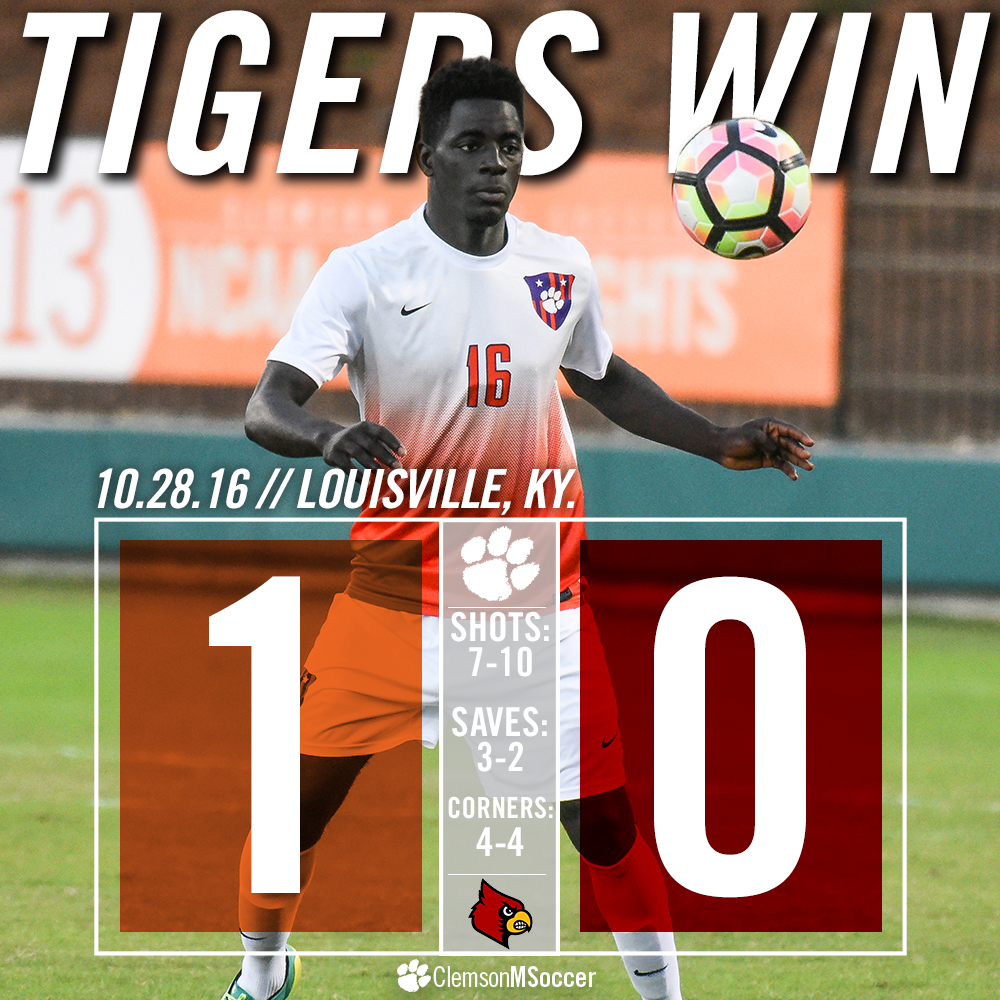 No. 5 Clemson Defeats No. 7 Louisville in Regular Season Finale

LOUISVILLE, KY. – The fifth-ranked Clemson men’s soccer team defeated seventh-ranked Louisville by a score of 1-0 on Friday night at Lynn Stadium to clinch the fourth seed in the ACC Tournament and a first round bye. Clemson improves to 11-2-4 (4-1-3 ACC) and Louisville falls to 11-4-2 (5-2-1 ACC). The tournament bracket is set to be released Saturday night once all ACC matches are final.

In the first five minutes, Louisville produced three shots and three corners to pin back the Clemson defense. With continued pressure by the Cardinals, a shot was fired back off the post as the Tigers tried to find their rhythm. For the final 15 minutes of the half, Clemson found the possession and controlled the pace, but the two sides would head into the halftime break level at zero.

The second half got off to a quick start when senior Alex Happi ripped a shot just seconds into the half that was saved by Stefan Cleveland. In the 60th-minute, freshman Malick Mbaye headed home a corner from junior Michael Melvin that was flicked to the back post by sophomore Patrick-Bunk Andersen, giving the Tigers a 1-0 lead over Louisville. As play continued and got more physical, Clemson was able to hold on for the final 30 minutes and defeat No. 7 Louisville to clinch the fourth seed and a first-round bye in the ACC Tournament.

In the match, Clemson took a total of ten shots with three on goal. Miralles recorded three saves and moves to 9-1-4 overall and earned his ninth shutout of the season.

“Tonight was a fantastic team win. We have concluded the regular season with the toughest schedule in the country,  No.1 RPI, and undefeated road record. These are testaments to a tough, resilient, relentless team that I couldn’t be more proud of. We will celebrate tonight, travel home and begin preparing for hopefully a long postseason run,” said Head Coach Mike Noonan. “Finally, our team and staff want to congratulate Coach Radwanski and our women’s program on their ACC Championship. It is a great time to be a Tiger!”

The Clemson men’s soccer team returns to action in the ACC Quarterfinals on Sunday, Nov. 6. The Tigers face the winner of the 5th and 12th-seed matchup.