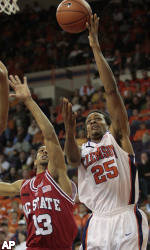 CLEMSON, S.C. (AP) – Clemson has rarely counted on the 3-pointer to break a game open. Then again, the Tigers have rarely had a fearless shooter like Terrence Oglesby.

The freshman had four 3-pointers, including two that started a game-breaking first-half run, and No. 24 Clemson beat North Carolina State 70-54 on Tuesday night.

Oglesby hit three 3-pointers in double overtime to save the Tigers (14-3, 2-1 Atlantic Coast Conference) last Saturday night in a 97-85 victory over Florida State. This time, the long-distance touch began a run of six consecutive 3s in the opening half.

Oglesby, Cliff Hammonds and K.C. Rivers each had two baskets in the surge, which turned a three-point game into a 32-21 lead the Tigers would not give up.

“Every shot he made tonight, and in the last couple of games, he makes constantly,” Hammonds said of Oglesby.

In his first four seasons, Clemson coach Oliver Purnell has relied on inside stars like 6-foot-9 James Mays, 6-7 Trevor Booker and a suffocating defense that wore out opponents.

While Hammonds and Rivers both ranked among the ACC’s top five in 3-pointers, they largely came when the Tigers needed to make up ground. Clemson ranked dead last in ACC 3-point shooting last season.

Purnell knew Oglesby could be the consistent outside threat the Tigers needed. Oglesby thought he could thrive with Clemson’s lockdown inside game.

“That’s the reason we’re getting the outside looks,” Oglesby said. “The guys inside are doing such a good job in the post.”

Purnell says it’s difficult for opponents to concentrate on the inside or outside without his team making them pay.

“You pick your poison with us,” Purnell said. “Especially if we’re being as efficient as we were today.”

Hammonds led Clemson with 14 points, while Booker had 13 and Oglesby 12.

North Carolina State (11-5) had come off an embarrassing 93-62 loss to No. 1 North Carolina to start the ACC season last Saturday. And the Wolfpack apparently couldn’t correct things quickly enough before facing Clemson to start the league 0-2 for the second straight season.

Freshman J.J. Hickson, the Wolfpack’s top scorer at better than 16 points a game, was held to four points.

Courtney Fells had four 3-pointers and led the Wolfpack with 19 points.

Lowe and his assistants harped the past few practices about not leaving Clemson’s outside shooters. However, most of the Tigers’ shots from behind the arc were uncontested.

Oglesby stands second in the ACC in long-range percentage and came into this game leading the Tigers with 42 3-pointers.

Oglesby’s has made 3s so routine this season at Clemson that all the Tigers are trying them – and making them.

Oglesby had six 3-pointers – his second game with that many this season – in the win over the Seminoles last weekend.

That touch continued against the Wolfpack, especially during Clemson’s game-breaking first-half run.

Oglesby’s two outside shots put the Tigers ahead 20-13. Hammonds was next up with a 3 and Rivers followed with another long-range basket moments later.

Hammonds nailed another one before Rivers closed the spurt with his second 3-pointer for a 32-21 lead with 1:58 to go.

The Littlejohn Coliseum crowd wanted more from its new favorite in Oglesby. Twice in the second half, he took a pass about 40 feet from the basket and fans began shouting for him to put it up. Oglesby just passed the ball and smiled.

Booker added his fifth career 3-pointer, all in the past three games. He had 32 and 29 points his previous two games.

North Carolina State starting center Ben McCauley was carried off the court with 1:31 to go. Trainers worked on his left ankle on the bench. Lowe didn’t know the extent of McCauley’s injury. bench.