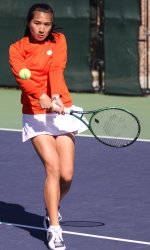 No. 23 Women’s Tennis Hosts a Pair of Top-Ten Teams this Weekend

The Clemson women’s tennis team returns home for matches against a pair of top ten teams this weekend after playing 11 of the last 12 away from home. No. 23 Clemson (11-6, 4-1 ACC) will take on No. 3 Duke (15-2, 4-0 ACC) on Friday at 5:00 pm, and No. 8 North Carolina (12-5, 4-0 ACC) on Sunday at 12:00 pm. Both matches are free to attend and will be held at the Hoke Sloan Tennis Center outdoor courts. Fans are encouraged to wear orange on Friday in order to support the team. Free pizza and t-shirts will be handed out at the conclusion of doubles play before singles play begins. Fans unable to attend are encouraged to follow the live scoring online at Clemsontigers.com. Clemson is 19-25 all-time against Duke, but holds a 37-14 record against the Tar Heels. This will be the sixth and seventh matches, respectively, against top-15 opponents this season. This is a key weekend for seeding, as Clemson has won four straight league matches and sit alone in fourth place, while the Blue Devils and Tar Heels are tied for second. The top four seeds receive byes in the first round of the ACC Tournament held next month in Cary, NC. Twelve of the nation’s top 100 players will be on hand this weekend, as Duke has six players in the rankings, North Carolina four, and Clemson two. Keri Wong (55th) and Klara Vyskocilova (88th) are Clemson’s ranked singles players, and each has a 5-0 mark in ACC play this season. Securing wins this weekend could help determine All-ACC selections. On the table for Wong should she win both matches is her 100th career singles win. She can become the third player in school history with at least 100 singles and 100 doubles wins in a career. Teammate Josipa Bek accomplished the feat earlier this season. In doubles, Wong is a part of two ranked duos. She and Bek form the 17th-best tandem nationally, while she and freshman Beatrice Gumulya are ranked 33rd, despite their limited playing time together. After this weekend, Clemson will head on the road to Virginia and Virginia Tech next weekend before closing the regular season at home against Wake Forest and NC State. Ranked Singles Players:No. 3 Duke: Beatrice Capra (2), Hanna Mar (51), Mary Clayton (70), Rachel Kahan (86), Monica Turewicz (92), Ester GoldfeldNo. 8 North Carolina: Zoe De Bruycker (30), Lauren McHale (33), Caroline Price (98), Shinann Featherston (100)No. 23 Clemson: Keri Wong (55), Klara Vyskocilova (88)Ranked Doubles teams:No. 3 Duke: Capra/Kahan (25), Capra/Goldfeld (32), Clayton/Goldfeld (42)No. 8 North Carolina: Featherston/McHale (4), Lyons/Hemm (71)No. 23 Clemson: Bek/Wong (17), Wong/Gumulya (33)