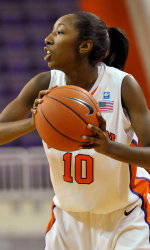 NASSAU, THE BAHAMAS – The Lady Tigers picked up play in the second half, but a drought in the first half was the difference, as No. 23 Syracuse (9-1) downed Clemson (6-7), 77-58, in the final game of the Bahamas Sunshine Shootout in Nassau, the Bahamas. Senior wing Kirstyn Wright was named to the All-Tournament team after averaging 11.0 points, 5.0 assists, and 5.0 rebounds against two nationally ranked opponents.

“It was good for our team to play this caliber of teams in the tournament,” said Itoro Coleman, who is in her first season as Clemson’s head coach. “We strive to be the best and play the best. Syracuse is a really good team. They did a good job of pushing the ball, and their 2-3 zone is tough, and they did a good job of knocking in some shots.”

Senior Sthefany Thomas led Clemson in scoring, going for 17 points, most of them coming on her 5-9 mark from long range. In the two games, she was 9-18 from behind the arc, and averaged 16.0 points. With the threes, she moved ahead of Lele Hardy for 7th on Clemson’s all-time three-point career makes.

Wright had 14 points, eight assists, and five rebounds on the evening while helping to hold two of Syracuse’s starting guards to a combined 2-14 shooting night.

“Kirstyn played really well in the tournament,” said Coleman. “She came ready to play, and played her heart out.”

Shaniqua Pauldo also chipped in with 11 points, all in the second half, as the Tigers made a concerted effort to get the ball inside.

Syracuse, who entered the game leading the nation in rebounding margin, points per game allowed, and third in field goal percentage defense, allowed Clemson 58 points, or nine points above their season allowed average.

The Orange post players were key, as Kayla Alexander (23 pts, 10 reb) and Iasia Hemingway (21 pts, 10 reb) each posted double-doubles, and combined for 11 of the Orange’s 18 offensive rebounds.

“We have to figure out a way to compete for forty minutes,” said Coleman. “I’ve preached it all season, and the team is learning really starting to feel it. I can’t fault our effort in the second half, we came out and played hard, did a good job getting the ball inside, and that created a lot of shots for our guards on the outside.”

After Syracuse knocked in the first two baskets and hit a pair of free throws to make it 6-0 with just less than 18 minutes to play in the first half, Clemson responded with a 15-0 run over the next two minutes to take a 15-6 lead.

Wright had eight points during the stretch, including two three-pointers.

But Syracuse, the nation’s top rebounding and defensive scoring team, forced 15 turnovers and held Clemson to just three baskets over the final 12 minutes, a 35-8 run, closing the half up 44-25.

The Orange made up much of their ground in the paint, scoring 24 points, while also hitting 11-13 from the free throw line, and hitting on 16 second chance points on 13 offensive rebounds.

Defensively, Clemson held the Orange to 1-10 from behind the arc, while hitting 5-15 attempts from long range.

Clemson will be off for the holiday, and will return to action on Dec. 30 when they travel to nationally ranked Georgetown. It will be the third straight game for Clemson against a ranked opponent.