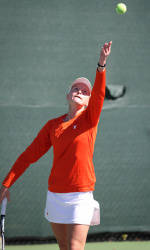 WACO, TX – The 22nd-ranked Clemson women’s tennis team took the doubles point and the first two singles decisions, but No. 13 Baylor claimed four straight singles wins at the top four spots to down the Tigers, 4-3, on Tuesday at the Hurd Tennis Courts in Waco, TX. Clemson (9-6) fell to the Bears (13-5) for the second straight season, and is now 2-3 against Baylor all-time. The Tigers have played nine of the last ten dual matches away from home, with eight of those coming against top-26 opponents. Clemson plays two more on the road before returning home for a pair of top-15 opponents at the Hoke Sloan Tennis Center on Mar. 30 and Apr. 1. Tuesday’s loss was Clemson’s third when taking the doubles point this season, after going a perfect 15-0 last season. Each of the three times this season, the Tigers have dropped a 4-3 decision. Clemson claimed the doubles point quickly on Tuesday, as the Tigers’ group of Romy Kölzer defeated Diana Nakic and Sona Novakova at flight two, 8-5. The Baylor twosome entered the match at 7-1 as a pair this season, but have now dropped two in a row. For the Clemson duo, it was their second straight win, upping their mark to 2-2 together this season. Keri Wong and Josipa Bek served for two chances for the doubles sweep, but Baylor’s duo of Ema Burgic and Nina Secerbegovic knotted the match at 7-7. Since Clemson had already claimed the doubles point, the teams agreed to play a tiebreaker at that point, which Baylor claimed, 7-4. The Tiger tandem had won two in a row, and are the school’s all-time leaders in doubles victories. Kölzer had lost four in a row before snapping the streak with a 6-1, 6-1 win over Abby Stainback on court six. She improved to 11-5 on the year, and gave Clemson the 2-0 lead in the match. Vyskocilova, ranked 103rd in the nation, defeated Megan Horter, 6-1, 6-2 to win her fourth straight match at flight five, and improve to 17-6 on the year. While the Tigers did hold a 3-0 lead, the Bears had taken the first set at each of the first four positions, and big leads in the second set on courts one, three, and four. Freshman Beatrice Gumulya was first to fall at flight four, dropping a 6-4, 6-4 decision to Ema Burgic, who improved to 5-1 at flight four, while Gumulya dropped to 2-2 at the position this season. 53rd-ranked Sona Novakova then took down Ciolkowski at three minutes later to pull the Bears to within one at 3-2. Novakova won, 6-4, 6-3 as Ciolkowski fell to 6-4 on the season at flight three.Nakic, ranked 13th, finished off Bek, 6-2, 6-3 at the top singles spot to tie the match up. Meanwhile at two, Wong was locked in a second set battle with 27th-ranked Nina Secerbegovic. The Baylor junior took the first set, 6-2 against Wong, but Wong came out swinging in the second set. She raced out to a 3-2 lead, and had a double-break point, but couldn’t close it out as Secerbegovic held. They traded breaks, which left Wong with a 5-4 lead, before Secerbegovic tied it up holding serve. They traded holds, although Wong had triple set point up 6-5 to extend the match, but Secerbegovic held to force a tiebreak. Secerbegovic took advantage of Wong’s errors to take a 5-1 lead into the changeover, before Wong made a run to pull within two at 6-4, but placed the next point into the net to seal the comeback for the Bears. The Tigers will now travel across country to get back into ACC play when they take on Boston College on Friday before heading to Maryland on Sunday.