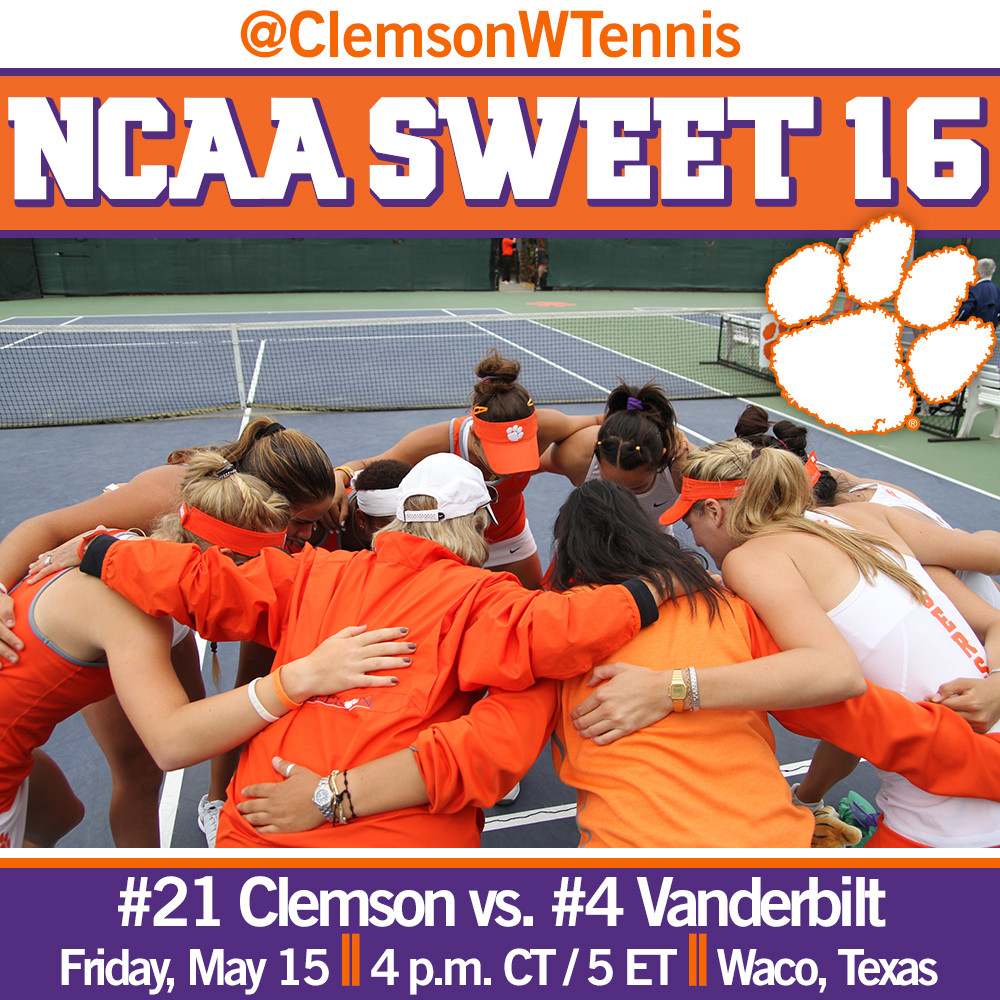 SCHEDULE UPDATE: Due to rain in Waco, the NCAA Round of 16 match vs. Vanderbilt will be played indoors at the Hawkins Indoor Tennis Center. Start time for the match is currently TBA, however, it will not begin before 5 p.m. CT (6 ET). Due to the move to the indoor courts, live video will not be available for the match.

WACO, TEXAS – The 21st– ranked Clemson women’s tennis team plays No. 4-national-seed Vanderbilt in the NCAA Sweet 16 on Friday, May 15 at 4 p.m. CT (5 p.m. ET) in Waco, Texas, the home of Baylor University. Live video, live scoring, and a live blog will be available on BaylorBears.com, and updates will also be provided on Twitter and Instagram, @ClemsonWTennis.

Clemson is 18-9 on the season, and is coming off of a 4-2 upset over No. 13-national-seed Alabama in the NCAA Second Round on Saturday, May 9 in Tuscaloosa. With the win over the Crimson Tide, the Tigers secured a spot in the NCAA Sweet 16 for the 10th time in the last 12 season, and also for the 10th time under Head Coach Nancy Harris. In Friday’s NCAA First Round match in Tuscaloosa, Clemson defeated South Alabama 4-0. In both matches, the Tigers won the doubles point and got singles wins from senior Beatrice Gumulya at No. 2, junior Joana Eidukonyte at No. 3 and senior Jessy Rompies at No. 4 singles.

The Tigers boast three ranked singles players and one ranked doubles team in the latest ITA poll. Eidukonyte, ranked 12th nationally, leads the Tigers with a 35-6 record overall in 2014-15 and a 22-3 record in dual matches, primarily at No. 3 singles. The First Team All-ACC honoree is currently on a six-match winning streak. Senior Romy Koelzer, also a member of the All-ACC First Team, is ranked No. 36 and is 20-11 overall (15-10 in dual matches) on the season, playing primarily in the top spot for the Tigers. Gumulya is ranked 60th in the nation with a 28-9 overall record and a 19-6 ledger in dual play. Gumulya and Rompies, both natives of Jakarta, Indonesia, are ranked fourth nationally in doubles with a 27-4 record. The duo will be the No. 4-national-seed at the NCAA Individual Championships next week in Waco.

Scouting VanderbiltVanderbilt is 21-6 on the year and finished their SEC slate with an 11-2 record, also claiming the SEC Tournament title in 2015. Most recently, the Commodores defeated Murray State 4-0 in the NCAA First Round before also sweeping Oklahoma 4-0 in the second round. Both matches were played in Nashville, Tenn.

Five of Vanderbilt’s singles players are ranked in the top 125, as well as two doubles teams. Sydney Campbell is the highest-ranked Commodore at No. 8, Astra Sharma is 42nd, Courtney Colton is 61st, Frances Altick is 96th and Marie Casares is ranked 120th. The doubles team of Antal and Sharma is ranked 18th nationally while Campbell and Colton are 20th.

Clemson has a 4-2 all-time record against Vanderbilt, including a 1-0 record in matches played at neutral sites. Friday’s meeting marks the third consecutive season that the Tigers and Commodores have met on the tennis courts. In 2013, Clemson won a 4-2 decision over the Commodores in the NCAA Second Round at home in Tigertown. In 2014, the two teams met at the ITA Indoor Championships with the 13th-ranked Tigers defeating 15th-ranked Vanderbilt by a score of 4-0.