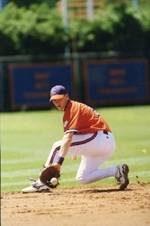 South Carolina lead-off hitter Nate Janowicz started the game with a single and then shortstop Drew Meyer followed with a home run, his seventh of the year, to go up 2-0 without an out. Clemson recorded three straight outs to move to the bottom half of the inning, but the Tigers were retired in order. In fact, South Carolina starting pitcher Kip Bouknight sat down the first six Clemson batters, including two by strikeout. The Tigers had six one-two-three innings Wednesday night.

With two outs in the third, USC catcher Brandon Pack launched another home run before the third out was recorded. Tiger second baseman Bradley LeCroy got the first Clemson hit after Bouknight retired the first eight batters of the game.

USC continued its offensive attack in the fourth. After Tripp Kelly hit a line drive to Khalil Greene, Marcus McBeth doubled and Chris Plummer singled. Janowicz hit a single to knock in McBeth and Plummer. The Tigers waited until the fifth inning to score. Stone singled in Michael Johnson, who reached on a single to start the inning.

The Gamecocks put up another run in the top of the sixth to pull ahead 6-1. The sixth inning proved to be Clemson’s big inning. The Tigers started the frame with consecutive hits by Scott Baker, Patrick Boyd and Brian Ellis. Michael Johnson then launched a shot to deep right field that hit about a foot from the top of the wall. Baker scored on the play to pull the Tigers within 6-2. Jarrod Schmidt followed with a sacrifice fly that scored Boyd.

Bouknight got the win for South Carolina going eight innings with nine strikeouts. He was relieved in the ninth by Scott Barber, who picked up his eighth save of the season. Bouknight improved to 10-0 with the win. Scott Berney was tagged with the loss to fall to 7-3.

The win, the Gamecocks’ first over Clemson since 1997, improved their record to 33-4 on the year. The Tigers fell to 29-8. The win snapped a string of three defeats to Clemson and marked just the third time in 15 games South Carolina was victorious over the Tigers. Wednesday’s game was just the second time the two teams met when ranked in the top 10. Clemson won 6-4 in 1998 when ranked as high as fourth. South Carolina was eighth in that meeting.

The crowd of 6,134 was the second largest to see a game at Kingsmore Stadium. The largest crowd to see a game at Clemson was in 1995, when 6,223 watched the Tigers beat North Carolina 20-1. Clemson will next be in action this weekend with three Atlantic Coast Conference games vs. Wake Forest at Kingsmore Stadium. Friday’s first pitch will be at 7:15 PM. Saturday’s will begin at 4:30 PM and Sunday’s game will start at 2:00 PM.