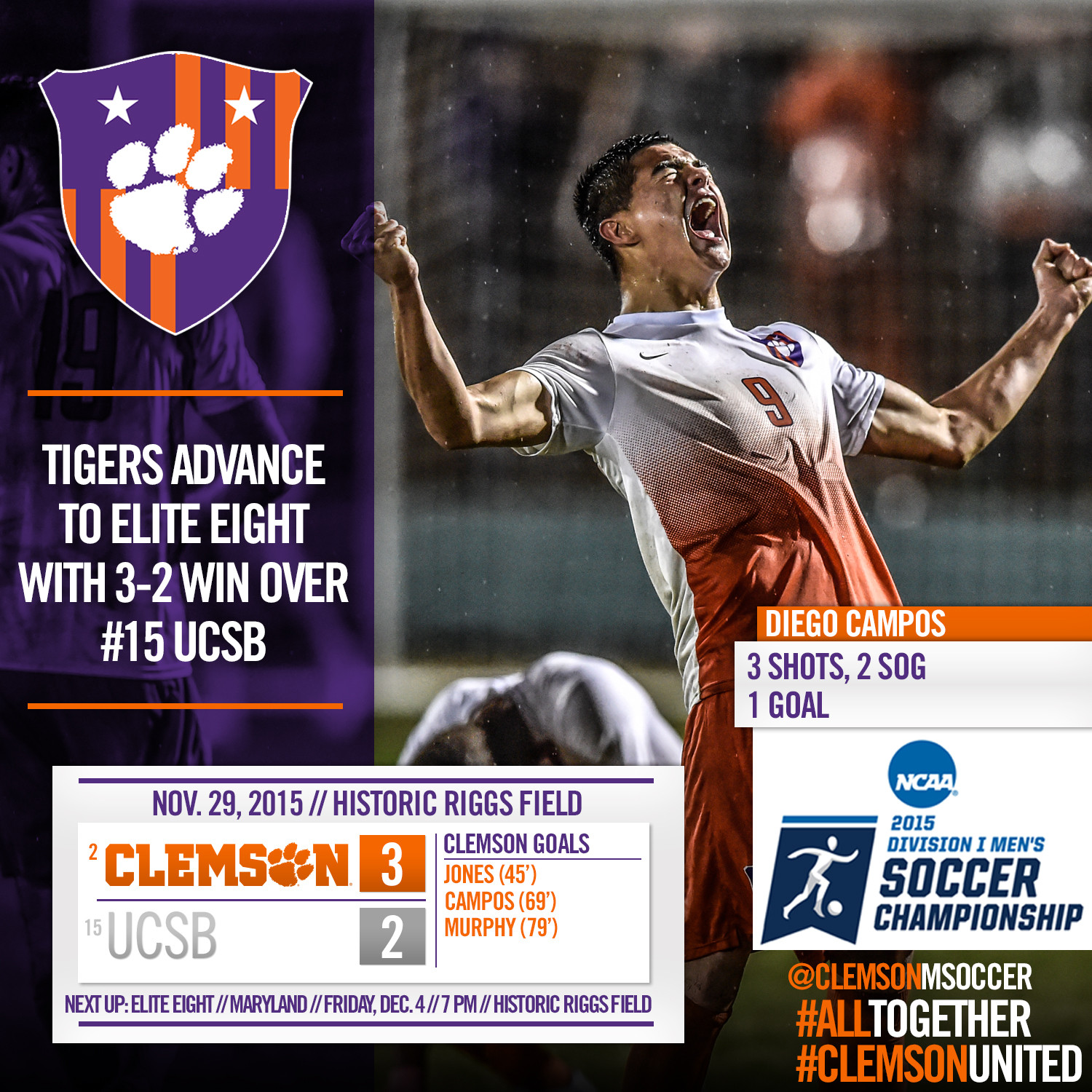 No. 2 Clemson Advances to NCAA Quarterfinals with 3-2 Victory over UCSB

CLEMSON, S.C. – For the first time in 10 years, the Clemson men’s soccer team is headed to the NCAA Quarterfinals, after defeating No. 15 National Seed UC Santa Barbara by a score of 3-2 in the Sweet 16 on Sunday night at Historic Riggs Field. With the win, the No. 2 National Seed Tigers improve to 17-2-2 on the season, while the Gauchos conclude their 2015 campaign at 14-7-2.

“UC Santa Barbara did a good job; they had scouted us well and they are well-coached. In the first half, I felt they got the better of us,” noted Head Coach Mike Noonan. “We scored a couple of world-class goals, and that certainly made a difference.

“Even though this was not our best performance, our guys were resilient, played hard and got the win. At this stage, that’s what it’s about; win and advance. In the end, I think it came down to character and will-to-win. UCSB had a great will to win, but ours was just a little bit better.”

UC Santa Barbara scored the game’s first goal, at the 38:48 mark in the first half. Seo-In Kim headed the ball in from five yards, with assists from Josue Espana and Cody Gibson, to give the Gauchos a 1-0 lead. With less than one minute remaining in the half, Tiger defender Aaron Jones tied the game with a beautiful shot from 24 yards. Jones, a junior transfer from Georgia State, received the ball at midfield and dribbled past several UCSB defenders before sending it into the net for his first career goal as a Clemson Tiger.

In the second half, Diego Campos gave Clemson a 1-0 lead with his fourth goal of the year. The sophomore forward dribbled along the top of the box before rifling an 18-yard shot into the upper left corner of the net at the 68:11 mark. Less than a minute later, the Gauchos evened the score when a ball played back to the Clemson keeper was intercepted and sent into the net by Kevin Feucht.

Redshirt senior Kyle Murphy turned out to be the hero for the Tigers in the 79th minute of play. Junior forward Thales Moreno passed the ball down the right wing to sophomore midfielder Saul Chinchilla, who sent a perfectly-placed cross in from the right side. Murphy scored from eight yards for his eighth goal of the year.

“Kyle Murphy is a redshirt senior, who was a non-scholarship player coming in. For him to come out and have a senior year in which he scores eight goals, including the game winner tonight, it’s a storybook ending. I just couldn’t be more proud,” Noonan noted.