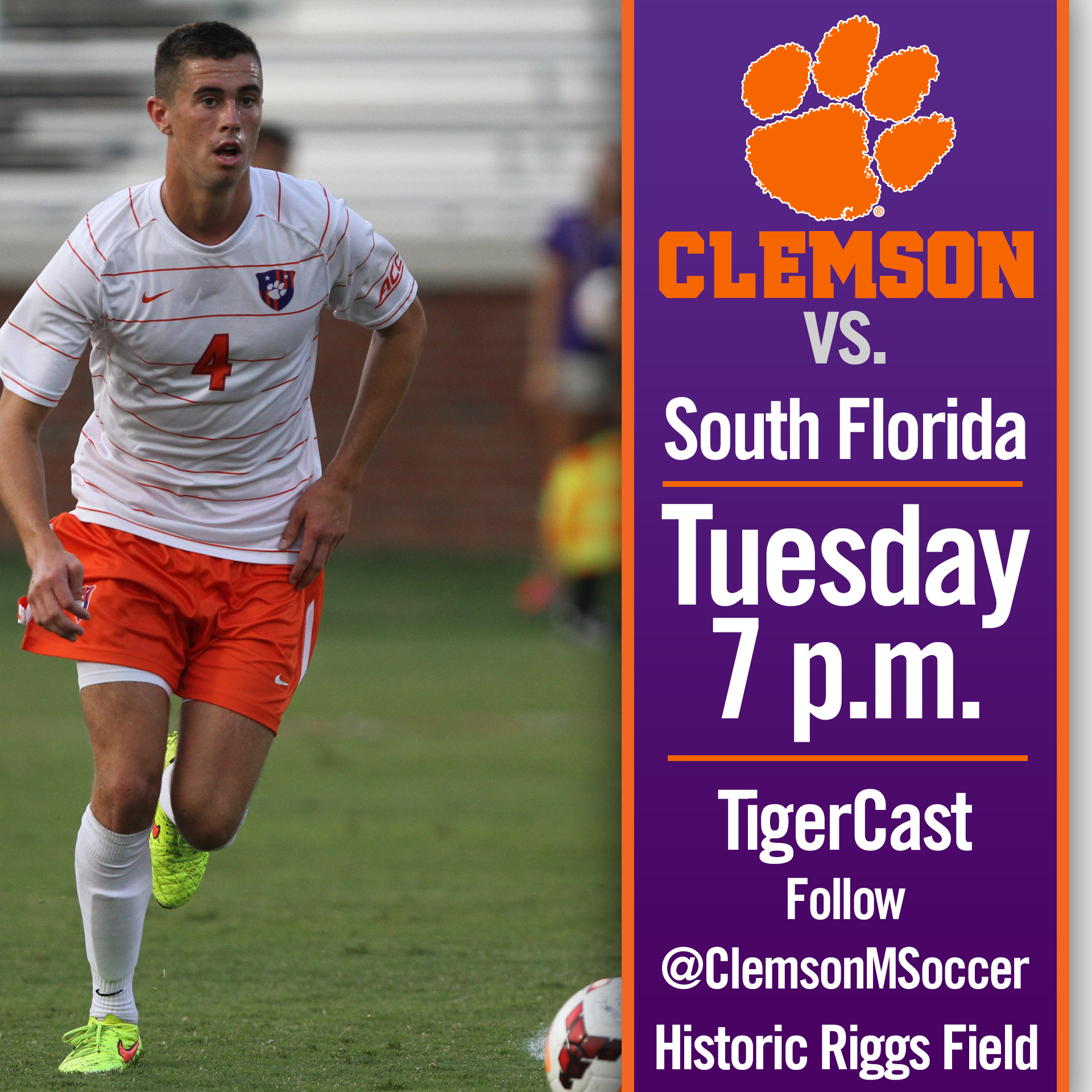 CLEMSON, S.C. – The 19th ranked Clemson men’s soccer team will host the South Florida Bulls Tuesday night at Historic Riggs Field. The match will kick off at 7 p.m. and will be broadcast on TigerCast. Tomorrow night’s match also is IPTAY Night at Riggs Field. Tickets are available online through the Clemson Ticket Office or at the gate.

The Tigers stand at 8-6-1 overall and 4-2-1 in the ACC on the season. Clemson’s last three opponents have been ranked, and the Tigers have not lost. Last week, they knocked off No. 21 Coastal Carolina 2-1 in overtime at Riggs, then played No. 11 Louisville to a scoreless draw Friday night. Clemson, Louisville and Syracuse are all currently tied for first in the ACC’s Atlantic Division. The Tigers are ranked 16th in the latest RPI poll, released by the NCAA this morning.

Junior T.J. Casner leads the Tigers in total scoring this season with 10 points. Casner, sophomores Thales Moreno and Austen Burnikel and freshman Oliver Shannon all share the team lead in goals scored, each has three. Senior Manolo Sanchez leads the team in assists (5) and shots (25). To date, 13 different players have scored a goal this season for Clemson. Sophomore Andrew Tarbell has started 10 games in goal, saving 27 shots en route to five wins and three shut-outs. Redshirt junior Chris Glodack has seen action in five games this season, all of which were starts. He has saved 27 shots for a .818 save percentage.

South Florida is coming off a 2-1 loss to conference foe Memphis last Saturday, Oct. 25. The Bulls are 9-5-1 overall this season and 4-2-1 in The American Conference. The Bulls have either been ranked or received votes in a national poll all but two weeks this season. They currently are not ranked. The Bulls are led by senior Lucas Baldin, who leads the team in both goals (5) and assists (9). Sophomore Spasoje Stefanovic has started 15 games in goal this season, saving 46 shots en route to nine wins.

Tuesday night’s meeting between Clemson and South Florida will be the first ever between the two teams.