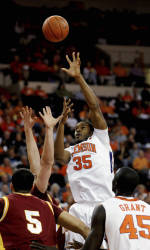 The Tigers (4-0) won their 30th straight November game since 2005 with a 102-66 victory over Winthrop on Monday night. Next up, though, is the 76 Classic in Anaheim, Calif., featuring three other teams ranked in the Top 25.

Does Purnell think the Tigers can match up with the increased competition?

“Yeah, I do,” he said. “Having said that, I haven’t seen any of the teams. It might the Lakers waiting for us out there.”

Right now, the Tigers feel they would even have something for Kobe Bryant and his teammates.

Trevor Booker had 15 points and 11 rebounds and five other Tigers scored in double figures in the team’s fourth straight blowout victory. Their closest margin came in last Friday night’s 89-67 win at UNC Greensboro.

Clemson starts the tournament Thursday against Texas A&M, then will take on either No. 8 West Virginia or Long Beach State on Friday.

“We’re excited,” Tigers forward Tanner Smith said. “We’re ready, though. There are some good teams that are really going to give us challenges.”

Winthrop (2-2) tried to give the Tigers a game, but eventually got run out of Littlejohn Coliseum.

Booker, Clemson’s 6-foot-7 senior, had a three-point play and fadeaway jumper as the Tigers broke on top 12-4 less than 4 minutes in. He really cranked it up to start the second half with six points in a 15-0 run that turned Clemson’s comfortable margin into a blowout.

Booker had his second double-double this season and the 24th of his career.

After a first half slowed by a total of 30 fouls, the Tigers showed their flash to start the final 20 minutes.

Booker and Smith had baskets and David Potter hit a 3. Smith stole the ball on Winthrop’s next possession, feeding a wide-open Booker for a left-handed jam that brought down the house.

Booker closed the spurt with a driving scoop shot that put the Tigers up 65-32. Purnell applauded his team when the Eagles called a timeout to try and cool off the run.

Purnell said the Tigers paid attention to taking care of the basketball and converting easy baskets during their run, something they didn’t do earlier in the game.

“Plus we got to establish Book,” Purnell said of his senior.

Potter, Noel Johnson and Andre Young had 12 points each, while Jerai Grant had 11 and Smith 10.

The Eagles’ frustration showed. George Valentine was called for a first-half technical for an elbow to the face of Smith that left a bright, red mark. Winthrop coach Randy Peele later drew a technical as he complained to an official.

The Eagles won in their last visit to Littlejohn Coliseum in 2001. That’s when Winthrop was flying high as a Big South Conference power with eight NCAA tournament appearances between 1999 and 2008.

Peele spent several minutes reminding his players of Winthrop’s past and the legacy they must uphold.

Walk-on Jonah Baize hit a 3-pointer to give the Tigers 99 points with 1:06 left, then followed with another long-distance shot from the right corner with 11.5 seconds to go.

Justin Burton had 13 points for the Eagles, who committed 26 turnovers.

Grant, the 6-8 son of former Oklahoma standout Harvey and nephew of Tiger great Horace, took control of the inside with two dunks and two blocks.

Grant had a rebound dunk of a missed jumper by Demontez Stitt to put Clemson ahead 42-27.

Soon after the game, Clemson’s players boarded a bus for Atlanta. They will fly to the West Coast on Tuesday morning.

Purnell’s eager to see how they’ll manage the three days.

“I think we’ve got a pretty good team,” he said.