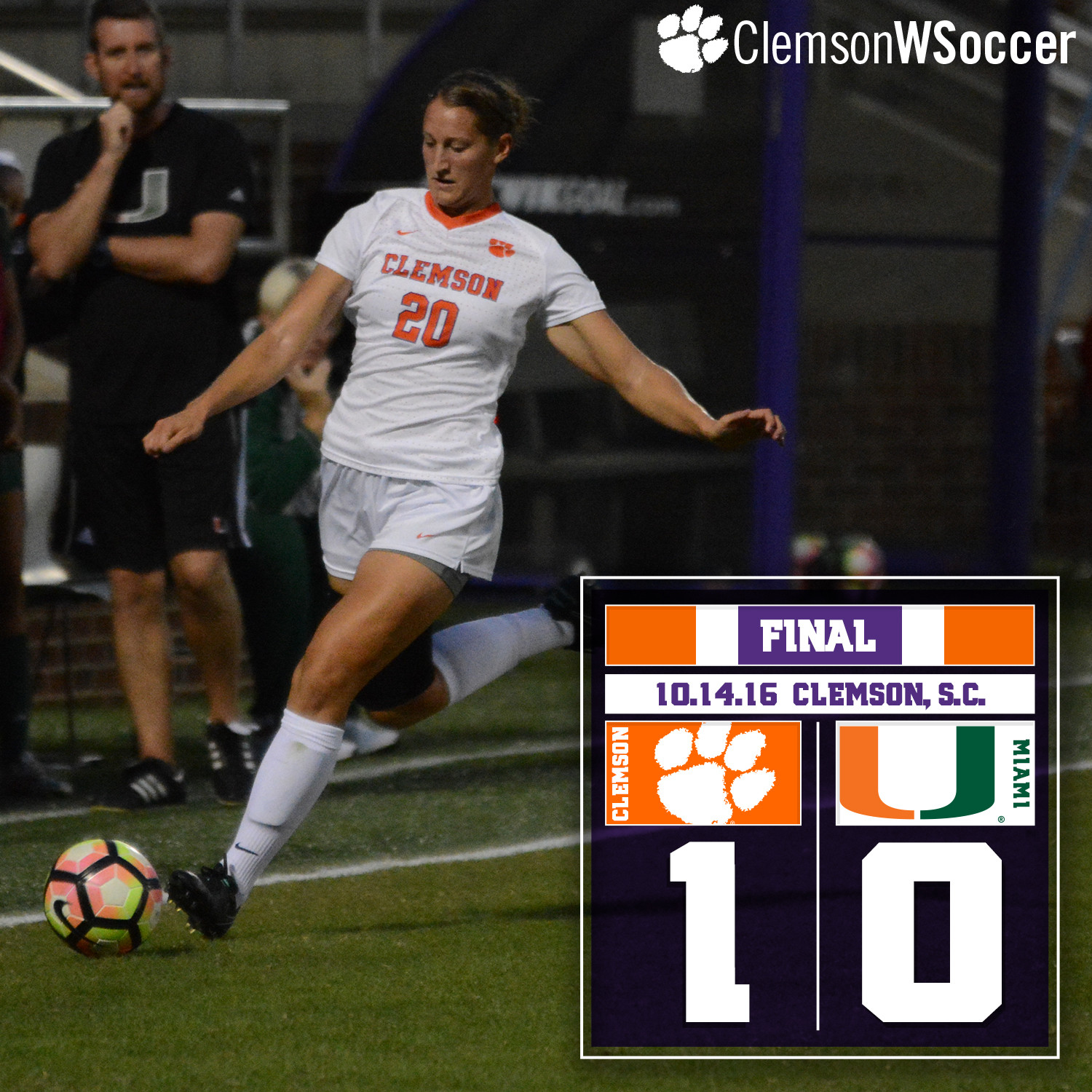 CLEMSON, S.C. – For the second-straight match, senior Jenna Weston scored the game-winner for the Tigers in a 1-0 conference victory, this time against the Miami Hurricanes at home at Historic Riggs Field on Friday night. With the win, Clemson improves to 10-3-2 overall and 4-1-2 in ACC play, while Miami falls to 8-7 (3-4 ACC).

“Well, that was a good three points,” said Head Coach Eddie Radwanski after the match. “We knew Miami would not be an easy game; it’s never an easy game with them. It was a special game for me because it was the first time I’ve ever coached against one of my former players (Kate Dylag, Miami’s assistant coach who was acting as its head coach for the contest). I was happy for Kate, and proud of her.”

“I thought we played very well in the first half, moving the ball and creating chances, and scoring a good goal. Miami came out with a strong effort in the first 15 minutes of the second half, but I thought we did a good job of managing the game, and didn’t concede many opportunities. It was a good defensive effort and we’re pleased to pick up another ACC win. Now it’s time to look forward to next week.”

Weston’s goal came in the 21st minute of play, and was enough for the Tiger victory. It was the second-consecutive contest that Weston scored the game-winner in a 1-0 win, as she also did so at Louisville last Sunday, Oct. 9. Freshman Dani Antieau and junior Shannon Horgan assisted on the goal.

The Tigers had another good scoring opportunity late in the game, when redshirt junior Tori Andreski rifled a shot from outside the 18-yard box which hit the crossbar, but did not find the goal. For the contest, Clemson outshot Miami 7-6 and earned five corner kicks to the Hurricanes’ three. Senior Kailen Sheridan picked up three saves and the win in goal, as well as the solo shutout, her third of the season. Sheridan also has two combined shutouts on the year, for a total of five.

The Tigers have two more home matches in their three-match homestand, starting with Boston College on Thursday, Oct. 20 at 7 p.m. at Historic Riggs Field.